However, the 23-year-old has broken a few records herself as she continues to shine for both her club and country, becoming a nightmare for defenders wherever she goes.

Since joining Arsenal back in 2017, the young striker has become one of the most talented players of the WSL - and despite recent talks surrounding Sam Kerr as the exciting newcomer of the league, Miedema proves why she is still one of the best in the gam In June, Miedema became the all-time top goalscorer for the Netherlands after netting in their 3-1 victory against Cameroon at the World Cup, taking her tally up to an impressive 60 goals, passing Manon Melis' record of 59.

Miedema has also scored more goals for the Netherlands than fellow ex Arsenal star Robin Van Persie who ended his international career with 50 goals, holding the record across both the women’s and the men’s teams.

Currently, she has 69 goals for her country in just 87 appearances - and at just 23-years-old, she has plenty of time to add to her remarkable record.

Most Goals in a WSL Game Arsenal’s recent 11-1 victory against Bristol City was a game full of many rewards. On Sunday, Miedema got six goals past goalkeeper Sophie Baggaley – netting three in each half of the 90 minutes.

The forward, who has been shortlisted for the Ballon d’Or this year, managed to net a 21-minute hat-trick to put the ​Gunners 5-0 up at the break. However, this clearly wasn’t enough for the Dutch international, as she netted a further three in the second half – breaking the record for most goals in a single WSL game.

Most Goal Involvements in a WSL Game 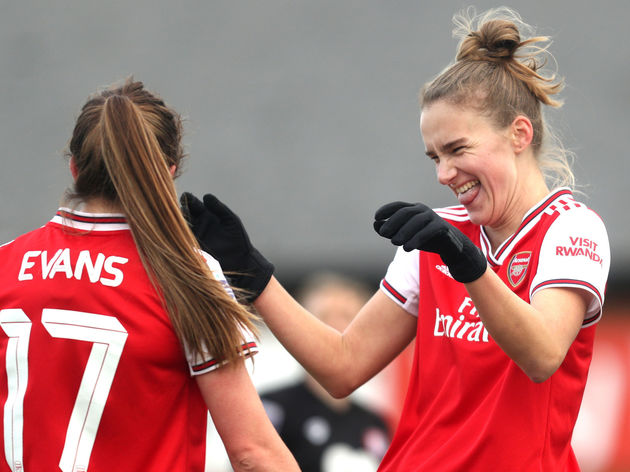 As well as netting six goals, Miedema also provided four assists in Arsenal’s 11-1 thrashing at the weekend, being directly involved in an incredible 10 goals for the Gunners - the most for any player in one game in WSL history.

Miedema started her assists early on in the game – providing a cross for Lisa Evans within the first seven minutes. She also set up Leah Williamson’s goal a few minutes later, following a superb cross from the other side of the pitch, before teeing up Jordan Nobbs and Evans again.

Her ten goal involvements meant that Miedema broke her own previous record of five, when she secured three goals and two assists against Liverpool back in September 2018.

Most Goals in a WSL Season Last season, it came as no surprise when the striker broke the record for the most goals scored within a single season. Miedema managed to find the back of the net 22 times as she helped her team go on to win the league title that same campaign.

As well as picking up the most goals in the league, Miedema was also rewarded with the PFA Players’ Player of the Year award – ending a successful campaign during her second season with the club, after departing from ​Bayern Munich in 2017.

Youngest Ever Player in the Dutch League

Although her current success is making headlines, the beginning of her footballing career was also an important time for Miedema. The Arsenal striker was signed by SC Heerenveen at just 14-years-old and made her senior debut at a tender age of just 15 - breaking the record for the youngest ever player in the Eredivisie Vrouwen. However, her goalscoring talents were recognised from the very start of her career – scoring 78 times in just 69 appearances for Heerenveen. This was enough to see Miedema move to Germany in 2014 to join Bayern Munich, where they won the Bundesliga for the first time, going the whole season undefeated.