However, it was Vivianne Miedema who stole the show on Sunday - scoring six and assisting a further four as her side completely humiliated their opponents in front of a home crowd. The Dutch forward is now the highest scoring non-British player in the WSL, already netting an impressive 23 goals in all competitions this campaign.

Yet, this wasn’t the only ridiculous score line the WSL has witnessed over its nine-year history. Here is 90min’s list of the seven biggest victories in the league… Back in 2017, the Blues managed to conjure up seven goals as they secured a convincing 7-0 victory over Liverpool. Goals from Gilly Flaherty, Fran Kirby, Ji So-yun, Maren Mjelde, Karen Carney, Erin Cuthbert and Drew Spence secured the win – with many players still currently playing a crucial part in the Chelsea squad.

The match took place during the Spring Series of the WSL – an interim edition between the 2016 season and the 2017/18 campaign. During this time, Emma Hayes and her team played in front of a smaller crowd at Wheatsheaf Park, but this didn’t prevent them from knocking up some pretty spectacular results… In that same year, ​Chelsea also secured a 7-0 win over Sunderland as their home fans witnessed yet another goal spectacle from the Blues. Despite Gemma Davison missing an early penalty and one of their key forwards, Eni Aluko, limping off early on, the Blues managed to turn their fortunes around.

Chelsea managed to put seven goals past the visitors – with Fran Kirby, Erin Cuthbert and Karen Carney all getting on the scoresheet once more. In the 2018/19 season, ​Arsenal managed to pick up the same result against Yeovil Town in the early stages of the campaign. Arsenal, who went on to become WSL champions that season, also secured a comfortable 5-0 win against Liverpool in the opening weekend. It wasn’t a great season for Yeovil as they also picked up a heavy 8-0 defeat by the Blues in the same campaign. This match, however, took part during the latter stages of the season as Beth England secured a hat-trick to put Chelsea up to third place in the WSL – where they eventually finished behind Arsenal and Manchester City.

Unsurprisingly, Yeovil were relegated that season after going into administration in March earlier that year. After they were denied an operating license for the Championship, the side were placed in the FA Women’s National League South where they currently play. But it wasn’t just the 18/19 season which saw Yeovil Town pick up some pretty embarrassing defeats. In the 2017/18 campaign they were once again defeated 8-0 by their opponents as ​Liverpool showed their ruthless side in the WSL.

However, the majority of goals came from the same player, as Beth England managed to net four in the space of thirty minutes against Yeovil. England, who was on loan from Chelsea at the time, returned to the club the next season and has since proven her worth as one of their most crucial strikers. Speaking of Liverpool, the Reds' biggest ever victory came against Doncaster Belles in the 2013 season. Liverpool, who went on the win the WSL that same year, put on a brilliant performance as they managed to net nine goals away from home.

The game featured two penalties, including a sending off for Doncaster Belles defender Victoria Williams, as Liverpool took advantage of competing against ten players. However, it was Fara Williams who scored the best goal of the game, finding the top left corner from the outside the box. 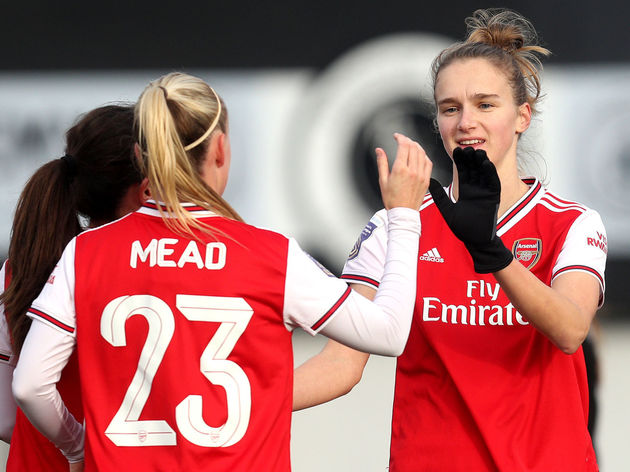 However, Arsenal went one better on Sunday as they ​scored eleven against Bristol City. As well as a hat-trick from Miedema, Jordan Nobbs and Leah Williamson also got on the scoresheet. Lisa Evans also netted two goals and Emma Mitchell got the last goal during the final ten minutes of the game.

The Gunners' impressive victory at the weekend saw them go ahead of Manchester City on goal difference as they sit at the top of the table - but Chelsea are still a game in hand as their game against Everton was postponed at the weekend.