It was honours even at Old Trafford on Sunday evening as Aston Villa became the latest team to take advantage of Manchester United's miserable season.

It took just 11 minutes for the visitors to strike first​, and it came in some style. Captain Jack Grealish, such a familiar source of brilliance, got the better of Andreas Pereira with his quick feet out on the left, before curling a stunner into the far corner which left David de Gea waving at the ball as it sailed in.

It would be half an hour before we saw another moment of real quality, but when it came it was much to the relief of United. They'd been lethargic throughout the first half, but an irresistible cross from Pereira picked out the head of Marcus Rashford, who couldn't miss had he wanted to at the back post.

1-1 was harsh on Villa, who had dominated throughout to this point, but they didn't take it lying down. They almost immediately retook the lead when a Trezeguet effort forced a strong save from De Gea at his near post, and Grealish was granted a glorious chance to score his second, defying logic when he fluffed wide from close range.

As the hour mark neared, what had been previously been a sluggish encounter suddenly woke up. Two good saves from Tom Heaton denied Anthony Martial and Aaron Wan-Bissaka, before a terrific Victor Lindelof header sparked scenes of relief and jubilation around a beleaguered Old Trafford.

It would be just seconds before we'd see another twist, however. United's defensive frailties had hinted at influencing the game, and did so immediately, when the combination of Matt Targett and Tyrone Mings cut through the offside trap, allowing the latter to slam in an equaliser.

It's an immediate response from Villa! Targett's dinked ball into the box is volleyed home by Tyrone Mings#MUNAVL

2-2 it would stay despite some late pressure from United, who ended the game as the stronger side but failed to fashion any notable chances in the closing stages. They remain in ninth, while Villa move to three points clear of danger.

Hovering around mid-table with just four league wins all season as the spectre of Mauricio Pochettino hung over his head, Ole Gunnar Solskjaer desperately needed a morale-boosting victory.

His side had been worryingly inconsistent, and humiliation in Kazakhstan during the week - second-string side or not - had intensified an already-pungent sense of malaise around Old Trafford, and added to a growing feeling that it just wasn't happening for the Norwegian.

Out of absolutely nowhere. Man Utd have been awful.

Ultimately, however, it was a result and a performance that did him no favours. The same themes - toothlessness in the final third while bereft of ideas all over the pitch - once again reared their heads, and while the result wasn't a disaster, it only added to the pressure.

When playing with confidence, United look like a good side. But their fragile mentality means they struggle to do so for more then the odd 15-minute burst. That will need to improve by Christmas if Solskjaer is to avoid an unwelcome gift from the hierarchy.

Drifting season to season is Man United’s default. Amazing how it’s been allowed to happen. No sign of a decisive strategy to arrest what’s a years long slump. Woodward remains one of the highest paid CEOs in football.

It was another difficult evening for United, but once again it was Rashford who came up with the goods when required, finding space at the back post to nod in and get his side back into the game.

Marcus Rashford has now been directly involved in 12 Premier League goals so far this season:

Only Jamie Vardy (15) and Kevin De Bruyne (13) have been involved in more.  #MUFC pic.twitter.com/PrLMNn6lB2

The service to him left plenty to be desired but he made it 11 in 19 in what looks dead-certain to be the most productive individual season of his career.

Of the three teams who gained promotion to the Premier League in 2018/19, Aston Villa have so far been the middle man. While Sheffield United have flown up the table like a bat out of hell and Norwich's shaky defence leaves them fixed in the bottom three, Villa have tread water; and that does them nicely.

A steady, stable stat to the season earned Dean Smith a ​new four-year deal during the week, and after comfortably dispatching of Newcastle on Monday, they were set to come to Old Trafford with the pressure somewhat off and take the game to United. 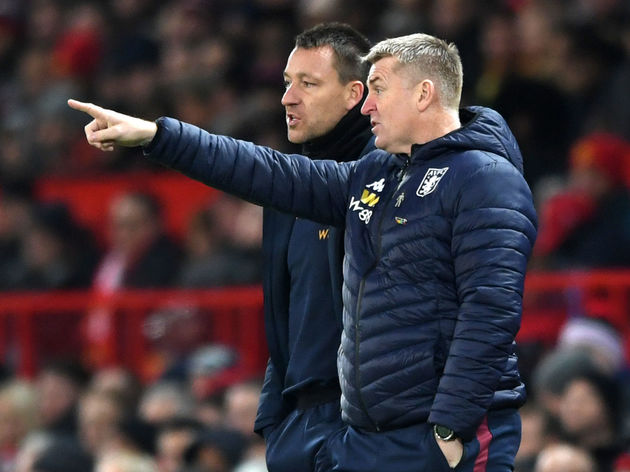 And that they did, showing no fear at one of English football's most intimidating venues. They gave some account of themselves, showing the right mix of guts and quality - even if a touch disjointed at times - that should establish them as a Premier League team once more.

Smith's combative formula may not be the most glamorous, but it's working at Villa, and they'll cause plenty of problems for the division's big names as the season goes on.

Playing football with just the right mixture of cocksure arrogance and mature subtlety, Jack Grealish is a genuine pleasure to watch at his best. Whether he's patrolling the midfield or causing havoc on the left-wing, he has a natural ability to change the game in the final third, and was once again instrumental for his side here.

Jack Grealish is a wonderful player to watch. Such grace with the ball at his feet. Superb goal. Deserves an England call-up.

Jack Grealish plays with the kind of arrogance @ManUtd players used to have. Not anymore.. #MUNAVL

He'll be kicking himself for spurning a gilt-edged chance to double Villa's lead at 1-0, but his earlier screamer was created from scratch. They're not short of midfield talent at Villa but such is their captain's influence that they simply cannot do without him.

A key double-header lies in wait for United, who host the return of Jose Mourinho with Tottenham on Wednesday before Saturday's Manchester derby at the Etihad.

And it's no easier week for Villa, who travel south to London to face Chelsea midweek before Leicester come to town on Sunday.