Bayern Munich slipped up at home on Saturday evening, as the German champions squandered a whole host of opportunities in a 2-1 defeat to Bayer Leverkusen.

Serge Gnabry wasted a huge chance in the opening eight minutes, and he was made to pay when Leon Bailey finished off a wonderful counter attack, sweeping the ball home to give the visitors a shock lead.

Bayern found an equaliser just after the half-hour mark, Thomas Muller ending his barren spell in front of goal with a deflected effort which squeezed beyond the Bayer Leverkusen shot-stopper. But their parity lasted less than two minutes, Bailey once again finding space on the left-hand side to streak away and fire past a helpless Manuel Neuer. The hosts almost equalised once more before half-time, but an incredible last-ditch tackle denied Ivan Perisic from slotting home.

Bayern continued to waste chance after chance in the second half as they pushed to get back into the game, and they were given hope with ten minutes to play, as Leverkusen defender Jonathan Tah was shown a red card for bringing down Philippe Coutinho when through on goal.

Robert Lewandowski hit the crossbar in injury time with a thumping header, but the visitors held firm to claim a precious and hard-fought three points at the Allianz Arena.

Goodness me, this team can carve out some openings. ​Bayern look back to their scintillating best following the sacking of Niko Kovac, and although the German champions were unable to get a point on Saturday, they proved that they're still a force to be reckoned with. Der FCB possess so much pace in Gnabry, and the link-up play between Lewandowski and ​Muller was a joy to behold at times. Wonderkid Alphonso Davies was played at left-back by interim boss

STAR MAN - Bayern were poor at the back and truly wasteful up top, but overall they completely dominated the game thanks to midfielder Leon Goretzka. realpassing helped Der FCB to create plenty of openings throughout the match. 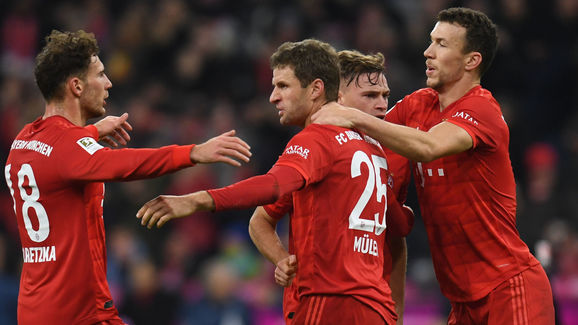 Goretzka almost levelled the match in the second half, but he was unlucky to hit the post when he reacted first to a dangerous corner kick. The 24-year-old was a driving force for the home side and he will consider himself very unfortunate to be on the losing side, given the chances his attacking colleagues failed to put away.

Bayern face another huge test next week, when they travel to title challengers Borussia Monchengladbach in a huge top of the table clash.

Bayer Leverkusen host ​Schalke on Saturday evening, and they'll be buoyed by their devastating counter-attacking performance against Bayern.