Liverpool extended their lead at the top of the Premier League table with a far from convincing display against Brighton on Saturday afternoon, Virgil van Dijk scoring twice from two Trent Alexander-Arnold assists.

Following a bright start from the visitors, Van Dijk opened the scoring for the hosts as he converted Alexander-Arnold's free kick with a towering header past the hapless Mat Ryan. The chances continued to come thick and fast for Liverpool, with Sadio Mane soon denied by an excellent stop from Ryan.

Liverpool eventually got their second five minutes later with another superb header from Van Dijk from Alexander-Arnold's in-swinging corner. The Brighton defenders were at sixes and sevens, unable to stop the Dutchman's rampant charge towards the ball.

The second half started as the first half finished, with Liverpool manufacturing several chances through Mane and Oxlade-Chamberlain. However, Brighton grew into the game and, if they had a bit more quality up top, may well have come away with a point.

Liverpool's Alisson saw red in the 76th minute after handling the ball outside his area following Trossard's attempted chip from a long ball over the top. Lewis Dunk smartly converted the resulting free-kick, passing the ball into the right-hand side of the net before substitute goalkeeper Adrian could set himself. 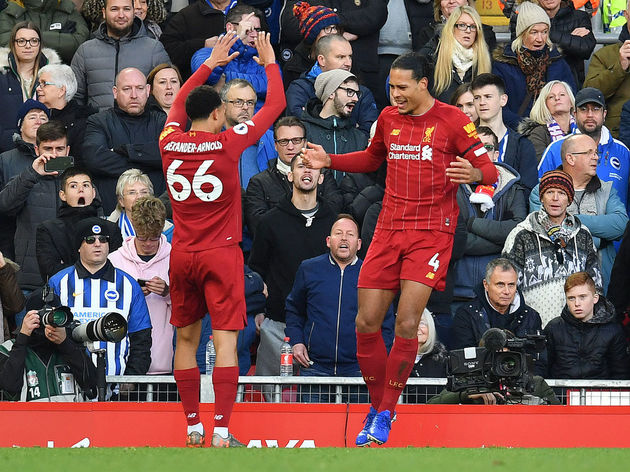 ​Despite the late goal, the Reds held on to take full advantage of Manchester City's slip up against Newcastle earlier on Saturday and now hold an 11 point lead over Leicester and the aforementioned City.

Liverpool have illustrated their ability to grind out results in recent weeks, with four of their last five Premier League victories ending 2-1.

It is no secret that the Reds are capable of exhibiting free-flowing, rotational, attacking based football, but Liverpool showed they were able to find goals from all over the pitch against Brighton, much to the delight of Jurgen Klopp.

Liverpool's display, however, was far from perfect and a lack of concentration nearly cost them dearly following Alisson's dismissal. The Brazilian shot stopper will now be unavailable for selection against Everton, Bournemouth and Red Bull Salzburg.

STAR PLAYER - It was an absolutely magisterial performance from Liverpool centre half Van Dijk in all aspects of the game. The Dutchman was commanding in his box, rarely putting a foot wrong and snuffing out danger at the first time of asking.

At. The. Double.  pic.twitter.com/vuzNy9kJWY

An accomplished performance was topped off with two headed goals in the first half, providing yet another example of why he is considered the best defender in the world right now. 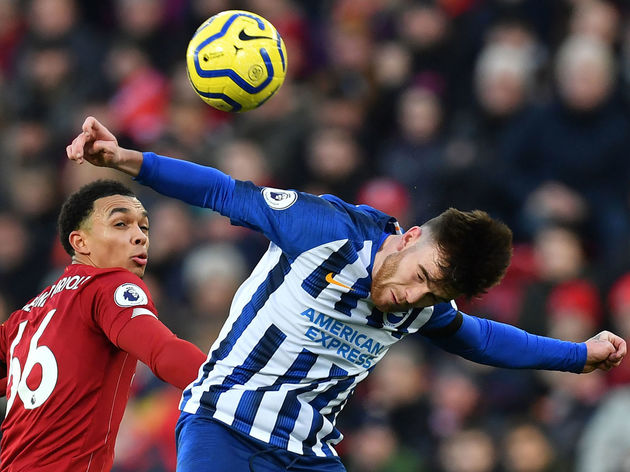 Brighton were far from poor against Liverpool. The Seagulls created a number clear-cut chances through Aaron Mooy and Aaron Connolly and, if they were able to finish off their chances, the visitors may well have come away with something from this fixture.

It is imperative that Brighton utilise the January transfer window in search of a striker to convert the chances they fashion.

If Brighton had a bit more quality about them up top Liverpool would be in trouble cos they've gone to sleep since the half hour mark.

Brighton have had five of the game’s six shots since Liverpool went 2-0 up.

Graham Potter will have some positives to take away from the match, in that his side didn't fold after going two goals down and were able to apply serious pressure to the home side following Dunk's goal.

STAR PLAYER - Brighton had a few contenders for star player against Liverpool - Lewis Dunk hardly put a foot wrong in the second half and capped off a respectable performance with a goal. However, Mat Ryan is undoubtedly Brighton's star player. The 27-year-old was instrumental in the Seagulls' resurgent second-half performance as a host of stunning saves kept the visitors in the game.

Only Brighton goalie Matty Ryan preventing this one from being a blowout, it's 2-0 Liverpool already and Ryan has made some excellent saves #LIVBHA

Matty Ryan is quite the keeper as well - immense

Following on from Saturday, Brighton travel to the Emirates Stadium on Thursday to face Freddie Ljungberg's Arsenal before hosting Wolves at the Amex Stadium three days later.