​Manchester City wasted the chance to close the gap on Liverpool at the top of the Premier League table after Newcastle's Jonjo Shelvey's late strike cancelled out Kevin De Bruyne's long-range effort.

Pep Guardiola's side had to bide their time, but they eventually took the lead through Raheem Sterling midway through the first-half when the 24-year-old found himself on the end of David Silva's backheeled pass and unmarked in the penalty area.

But Newcastle hit back within minutes with a carbon copy of Manchester City's opener, with Miguel Almirón setting up full-back Jetro Willems to bring the game back on level terms.

There was a distinct lack of pace in the game throughout the first half, and things didn't improve in the second as both sides continued to struggle to create any goalscoring opportunities.

It was game that looked destined for a draw, but De Bruyne popped up with a goal of the season contender which appeared to snatch all three points away from Newcastle United.

The ball bounced up for De Bruyne on the half volley, and the Belgium international leathered the ball into the back of the net via the underside of the bar, leaving Martin Dúbravka helpless to save it and the home crowd stunned.​​ 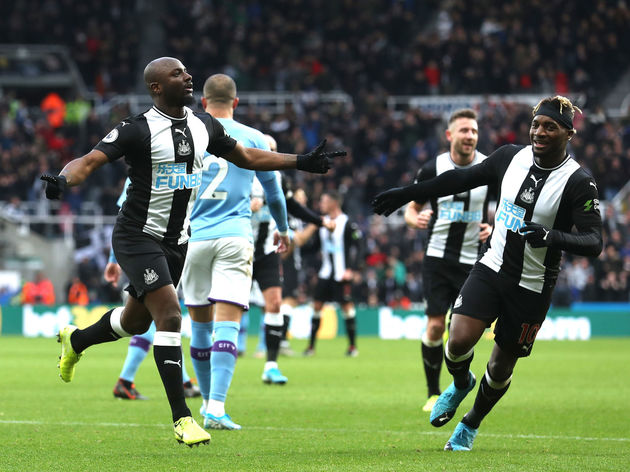 STAR PLAYER - If you thought moaning about Newcastle United's toothless attack was a bit repetitive, then the chances are you're not going to enjoy this either.

Almirón had the odd moment where he looked the player Newcastle United fans thought they'd signed in January, but once again it was Saint-Maximin who stole the show for the Magpies at St. James' Park.

Pep must be hot on Allan Saint-Maximin’s recent form.

Allan Saint-Maximin is probably the most entertaining player to watch in the Premier League.

Even up against Kyle Walker, Saint-Maximin was a constant threat throughout the match and was an obvious headache for Pep Guardiola.

Ultimately Saint-Maximin's performance proved to be enough to help Newcastle snatch a point, simultaneously giving Liverpool one hand on the Premier League title.

It was a match which summed up Manchester City's recent problems perfectly, with Guardiola's side struggling to get out of second gear against a counter-attacking side who were happy to sit deep and soak up pressure. 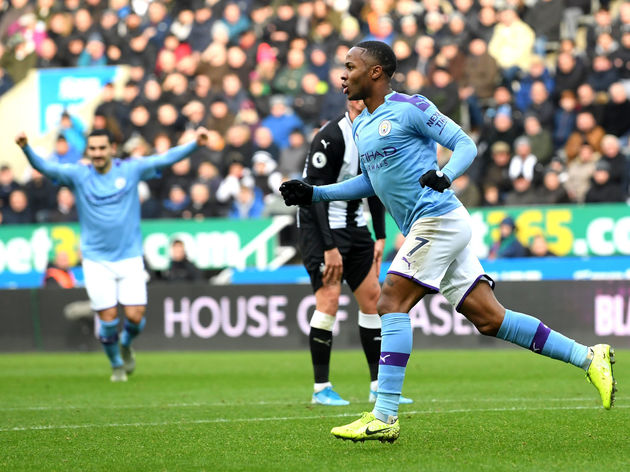 Sterling was able to score their only real chance of the first half, but it looked like it would be a frustrating afternoon when Gabriel Jesus and Bernardo Silva missed fantastic chances to put Manchester City back into the lead.

De Bruyne's late stunner was cancelled out by Shelvey in the last few minutes of the match, which ensured Manchester City were forced to share the points in what was

An ASTONISHING strike from KDB which crashes in off the bar for his fourth of the season.

STAR PLAYER - He might be 33, but there's still magic in the boots of David Silva and he showcased that perfectly to create Manchester City's opening goal from almost nothing.

The former Spain international was always in and around the final third, appearing to be involved in every single City attack, while his flawless positioning left Shelvey and Isaac Hayden constantly look over their shoulders.

11 - David Silva has been directly involved in more Premier League goals versus Newcastle than against any other side in the competition (5 goals, 6 assists). Magician. #NEWMCI

No one can do what David Silva does. No one.

David Silva genuinely most underrated player in Prem History, the blokes a genius

Loads of little deflections but they haven’t picked it up on commentary and that’s the incredible assist from David Silva. Watch again. 

Silva's age unsurprisingly started to show as the game went on and the Spaniard had to be brought off in the second half, with City clearly lacking something in the final third after he was replaced by Phil Foden.

The Magpies will be looking to get three points on the board when they travel to face Chris Wilder's impressive Sheffield United side on Thursday, while it's Southampton who will be next to journey to the northeast.

For City, they've got a trip to Turf Moor on the horizon before the first Manchester derby of the season.