When you're two days away from returning to your old stomping ground. pic.twitter.com/ojwFWCJAk6 Diego Costa is absent for ​Atletico, having been sidelined for three months with a neck injury. He is joined in the treatment room by centre backs Stefan Savic, who has not played since early October due to a hamstring injury, and

The headline injury news for ​Barcelona is on Ousmane Dembele, with the Frenchman expected to miss around ten weeks of action after picking up a hamstring problem against Borussia Dortmund.

The visiting side will also be without Nelson Semedo, who is ruled out until 2020 with a calf problem, and Sergio Busquets, who misses out through suspension after receiving his fifth yellow card of the season last weekend against Celta Vigo. 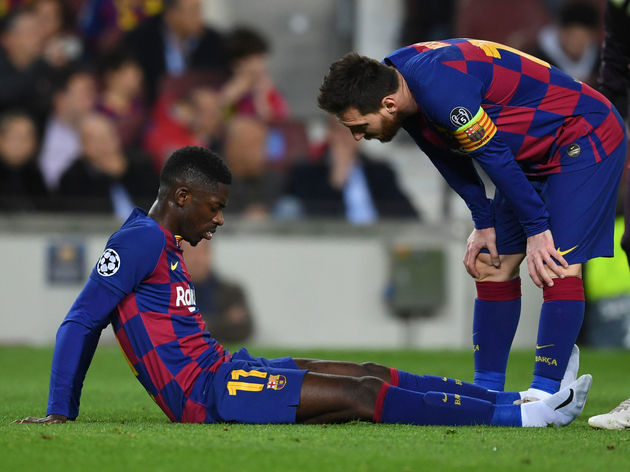 Jordi Alba is also a doubt, having not featured since sustaining an injury against Slavia Prague ​at the beginning of November.

Antoine Griezmann, who spent five years at Atletico Madrid, returns to the club for the first time since Barcelona controversially broke transfer window rules to secure the Frenchman's signature this summer. Griezmann returns to his former side with a point to prove, having only scored five goals in 17 games since his switch. Atletico have a poor recent record against Barcelona, having not registered a La Liga win against them since February 2010.

Since the start of the decade​, Barcelona have dominated the fixture, winning 14 of the 19 league meetings between the pair.

The sides last met in April, with Barcelona running out 2-0 winners at Camp Nou thanks to two late goals from Lionel Messi and Luis Suarez. Having kept pace with Real Madrid and Barcelona at the top of La Liga, Atletico have stuttered in recent weeks, with three draws in their last four league outings.

The hosts have only won once in their last seven games in all competitions, after losing to Juventus in the Champions League in midweek.

Barcelona go into Sunday's fixture looking to record their fourth straight win in all competitions. However, they have not been convincing this season, particularly away from home.

Despite their world class front three, Barcelona laboured to a 2-1 win over bottom side Leganes in their last league outing​, and with a tricky run of fixtures coming up - including a trip to Inter and the rearranged Fixtures between Barcelona and Atletico have a recent history of being cagey affairs, and with Barcelona's disappointing form away from home and Atletico's run of seven draws in their last 10 league fixtures, it is hard to see these two sides being able to separate themselves over 90 minutes on Sunday.

With Barcelona's enviable attacking trio, it is a struggle to imagine Atletico keeping them out. But Barcelona have been weak defensively this season, conceding 16 goals in 13 La Liga fixtures, so you cannot see them not conceding.