​Liverpool are fearful midfielder Fabinho could miss up to six weeks of action after sustaining an ankle injury during the 1-1 Champions League draw with Napoli on Wednesday night.

The Brazilian was substituted midway through the first half, and after the encounter manager Jurgen Klopp admitted the problem could be 'massive'.

According to the Daily Mail, Fabinho did not undergo scans after the game as the club wanted to let the injury settle before investigating, but there is a fear the 26-year-old could miss the vital festive period. Liverpool will play in the ​Premier League, Champions League, Carabao Cup and Club World Cup during December. With the Reds still not guaranteed of a spot in the knockout stages of the Champions League, losing Fabinho for the trip to Salzburg would be a huge blow.

While ​Liverpool have a gluttony of midfielders to choose from, Fabinho has arguably been their most impressive so far this season, with his combative style of play winning his side possession on a regular basis and helping them transition from defence into attack quickly.

Potential replacements Klopp could consider include Georginio Wijnaldum, Alex Oxlade-Chamberlain and Naby Keita, though the latter has struggled with injuries during his Anfield career so far. 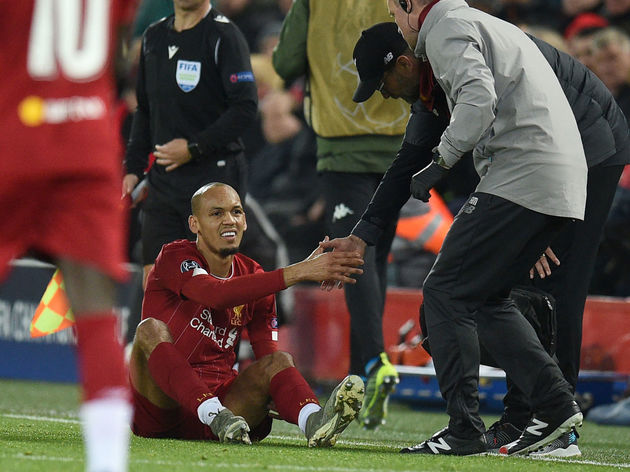 Klopp's side are scheduled to play a game every three or four days during December, starting on Saturday with the Anfield clash against ​Brighton. Liverpool then face Everton in a Merseyside derby on the following Wednesday, before a trip to Bournemouth on Saturday.

The crucial clash in Salzburg follows before another league game against Watford, with the Aston Villa-Club World Cup double header set for 17 and 18 December respectively.

Fabinho has featured in 12 of Liverpool's 13 Premier League games so far this season, starting 11, but his injury could have a sustained impact on their title challenge approaching one of the busier parts of the season. He also scored in the 3-1 victory over Manchester City.