Wolves booked their place in the Europa League round of 32 on Thursday evening, with a 3-3 draw with Braga enough to send them and their hosts through in Portugal.

Braga broke the deadlock six minutes in at the striking Braga Municipal Stadium, with a stroke of luck playing a part in the opening goal. André Horta found himself with decent space outside the box, and his powerful shot took a deflection off Ruben Neves that took it above and beyond Rui Patricio to put the hosts ahead.

Wolves weren't behind for long, equalising soon after through in-form Raul Jimenez. Jonny Otto delivered a sumptuous ball, and the Mexican talisman adjusted himself well to head it away from Eduardo and into the bottom corner, netting his third goal of the group stage campaign.

Wolves deservedly took the lead having settled into the game, as Jimenez sent a beautiful pass into the box which Matt Doherty headed home. 81 seconds later the ball fell to Adama Traore, who burst forward and smashed his effort home to give the visitors a sound advantage going into half-time.

Braga changed the momentum of the game when they pulled one back, with Paulinho tapping home a vital consolation. With ten minutes to play, Braga levelled it up through Fransergio's bullet header, fighting back to earn a point that saw both Braga and Wolves qualify for the round fo 32. 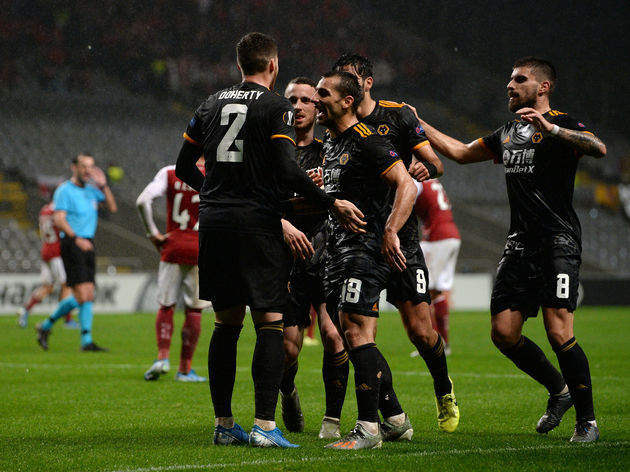 ​Wolves arrived in Portugal knowing that a point would see them progress, and a win would put them in control of Group K. Braga's early goal didn't seem to faze the west Midlands side at all, as they stayed focused and went up the other end to equalise eight minutes later.

That equaliser was the confidence boost Wolves needed, as their beautiful attacking football was rewarded with two quick-fire goals. They stayed professional throughout the game and looked to be heading for all three points, but some lacklustre defending saw them throw away the win.

Despite the two points lost, Nuno Espirito Santo's side will be delighted with the result, as they book their berth in the round of 32. It has been a fantastic Europa League campaign for Wolves, and with their draw with Braga showed them at their attacking best, it is now a case of how far Wolves can venture in Europe.

STAR MAN - Raul Jimenez did everything right on Thursday, in a wonderful striker's performance. He kicked it off with an excellent equalising header, before registering back-to-back assists - one being an absolutely delightful ball into the box for Doherty's header.

The Mexican had a fantastic game up front, getting his seasonal tally up to 20 goal contributions. Jimenez has truly hit his stride and was outstanding for Wolves in Portugal, putting in a typical striker's display as the west Midlands side came away with the result they needed.

15 - Wolves' Raul Jimenez has scored 15 goals in all club competitions this season, more than any other Premier League player in 2019-20. Pacesetter. pic.twitter.com/LPDVoZDkQM Braga are back at home in four days, as they welcome Rio Ave to the Braga Municipal Stadium next Monday. The Portuguese side are on the road at the end of next week, when they visit Aves on 7 December.

Wolves have a double header at Molineux in the ​Premier League, with in-form ​Sheffield United the first visitors on Sunday. Nuno Espirito Santo's side then host struggling ​West Ham on 4 December, with the Hammers currently three points off the relegation zone.