The force had earlier put special stop and search powers in place after other police forces elsewhere in the country had raised concerns about the behaviour of Napoli fans travelling towards Liverpool.

Officers policing the LFC v Napoli CL game have arrested 5 Napoli fans. 3 men were arrested for violent disorder and another was for affray following disorder on Walton Breck Rd before the game. A fifth man was arrested for breach of the peace at the turnstiles on Anfield Road. pic.twitter.com/fLcDEVrtAB

A statement confirmed that three men were arrested for violent disorder and another affray following an incident on Walton Breck Road in the Anfield area. A fifth supporter was also arrested for a breach of the peace by the turnstiles at the Anfield Road end of the stadium.

There were widespread claims on social media that some Napoli fans in Liverpool were also armed with golf clubs. Police responded to the reports and while it appears that there was no evidence of golf clubs, a ‘significant number’ of flags and flag poles were confiscated.

Liverpool drew the game 1-1 when Dejan Lovren cancelled out Dries Mertens’ first-half opener. The Reds, who lost against Napoli in Italy on matchday one, needed to win to be sure of their place in the Champions League knockout rounds with a game to spare.

Qualification will now rest on game six, with Liverpool needing to avoid defeat against Red Bull Salzburg in Austria in order to progress, regardless of the other result.

A win in Austria will ensure that Liverpool finish top of the group and be seeded in the knockout draw, no matter what Napoli do against Genk. 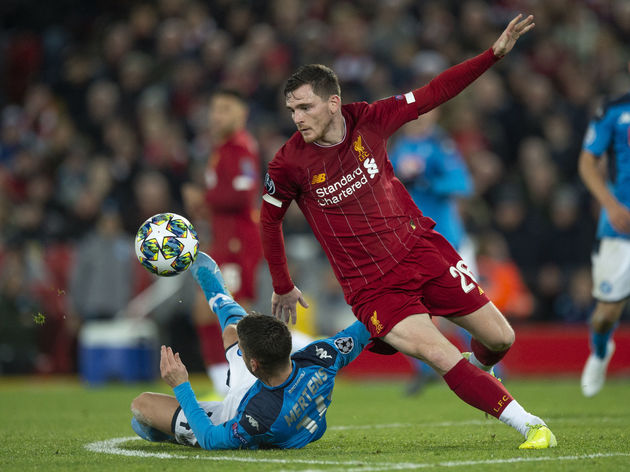 The holders can still be knockout out, however. Assuming Napoli beat already eliminated Genk at home as expected, defeat to Salzburg by two or more goals would see the Red Bull club also leapfrog Liverpool by virtue of head to head goal difference.

In that scenario, the Reds would continue their European season in the Europa League.