Liverpool failed to confirm their place in the knockout stages of the Champions League after they were held to a 1-1 draw by Napoli on Wednesday night at Anfield.

Liverpool entered the game having won their last seven matches, while Napoli had gone over a month since tasting victory. Yet there was no evidence of a lack of confidence from the visitors before the break.

Having suffered a blow early on when Fabinho limped off after a knock to the ankle, Liverpool struggled to settle and Napoli took full advantage. A simple long ball over the top found Dries Mertens in acres of space, and he kept his composure to drill his effort into the bottom corner.

After a disappointing first half, Liverpool needed to find a response after the interval. They did just that.

Napoli had been given a warning when Roberto Firmino headed narrowly wide, and it was another header that provided Liverpool's equaliser in the 65th minute. Dejan Lovren rose highest from a corner to steer the ball into the corner of the net.

The home side looked the more likely winners in the closing stages, but they could not find the necessary quality in the final third, meaning that they had to settle for a point.

It ends level at Anfield.

All down to matchday six 

Liverpool have made a habit of being very hard to beat. Just four defeats across all competitions so far in 2019 can attest to that.

Much of their success last season was built on having a rock solid defence with Virgil van Dijk at the heart of it. Yet there have been worrying signs at times this season that they are becoming easier to break down. The side have only kept three clean sheets this season, and Napoli were able to find the net following a simple ball over the top in the first half here.

With the team constantly winning it has meant that the defence have been able to get away with their uncharacteristic errors. However, with the pressure set to crank up as the season enters the busy festive period, Jurgen Klopp will want his back four to return to their best form quickly. 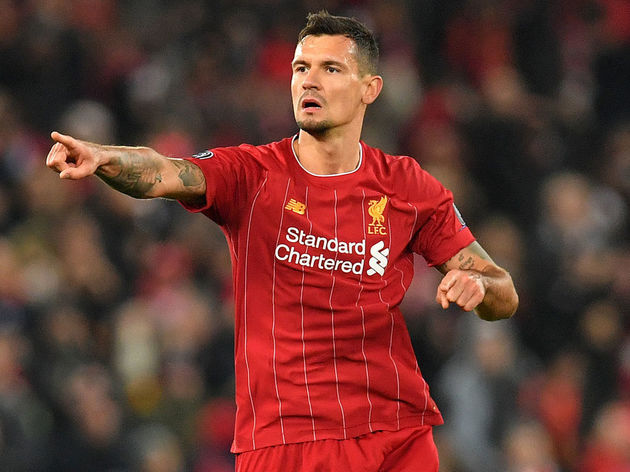 Not an easy pick as Liverpool underwhelmed for long periods of this game. Dejan Lovren could have done a little better with Napoli's goal, as both he and Andy Robertson failed to play Mertens offside.

Yet the Croatian just gets the nod for his response to that error. Rather than letting his head drop he was far more reliable after the break, and he popped up to power home an excellent header to get Liverpool level.

Lovren still has plenty to do to prove that he should be challenging for a starting spot when Joel Matip returns from injury. However, his ability to respond to an early setback was impressive here. Napoli came into this game without a win in their last six games, with five of those matches ending in draws. That run has already left them 15 points adrift of league leaders Juventus.

Off the pitch, things have not been going much better. After the players refused to go on a training retreat several of their senior figures, including club captain Kalidou Koulibaly, were hit with hefty fines by the club's owner.

Yet the club had not lost any of their first four games in this season's Champions League, so this was their chance to put some of the recent unrest behind them and secure their passage into the last 16.

While they did not do that, they did produce a much improved performance to offer hope to their fans that they can turn things around in the coming weeks. Napoli had to defend for much of the match here, especially after taking the lead in the first half. For the main part, they did well and that was led by their captain Koulibaly.

The Senegalese centre back has been linked with a move to the Premier League and it was clear to see why based on this performance. His positioning was often excellent, with one such example occurring in the second half when he spared Alex Meret's blushes by getting back on the goal-line to clear Firmino's goal-bound shot.

With the team struggling in the opening months of the season, they will need his leadership to overcome their slump. Displays like this one indicate that he is up to the task.

Liverpool return to action this weekend looking to extend their unbeaten run ​in the Premier League to 31 games. They host Brighton as they aim to cement their lead at the top of the table.

Meanwhile, Napoli will be hoping for their first domestic win in over a month when they take on Bologna on Sunday evening.