One thing not widely predicted of the Northern Irishman was that he would had such an impact at the King Power Stadium that the Foxes would be sitting second in the ​Premier League table, above the likes ​Manchester City, ​Tottenham and ​Arsenal. They might be cut adrift of league leaders ​Liverpool, but Leicester are sensationally on course to amass more points than they did in their title-winning 2015/2016 campaign - but just how seriously should we take Rodgers' underdogs?

Well, one thing that wins you titles in a solid defending and Leicester have showcased this in abundance so far this season.

The fact that Leicester currently have the best defensive record in the Premier League, Bundesliga and La Liga is pretty remarkable, as p

Second in the table #lcfc pic.twitter.com/aBDBNqcTJD

During his first senior management gig at Watford, the Hornets averaged 1.44 goals conceded per-game as they finished with the second worst defensive record in the Championship.

Next, Rodgers lasted just four months in charge of Reading, before being sacked for a string of bad results. Defensive problems were again a theme, as at the time of his departure in December, the Royals had already conceded 33 goals - the joint fourth highest in the league.

In the narrative of Rodgers’s rise as a top level manager this Reading aberration is largely airbrushed out, relegated to simply being a result of a young, developing manager trying to find his feet. In his first campaign, city rivals Everton out-performed the Reds defensively and this pattern was repeated in subsequent seasons with perennial strugglers Hull City only very narrowly conceding more goals than Liverpool in the 2013/2014 and 2014/2015 seasons.

After he was replaced at the Anfield helm by Jurgen Klopp part way through the 2015/2016 campaign he stepped into a role as Celtic manager.

Even in this, his most dominant managerial period, there was little evidence that Rodgers’ success was being built of solid defensive foundations.

Leicester City have the best defence and joint best GD in the PL this season.

They sold Maguire for £85m and invested that money on 3 players.

A 7-0 defeat at Camp Nou during his first season, as well as a 7-1 defeat to PSG in his second, are telling indications of Rodgers’ failure to set up his side up adequately to defend against stronger opposition away from home.

All of this seems to point to the fact that the current Leicester boss - unlike Tony Pulis and Sam Allardyce - is not the man to call to stop your team conceding goals.

Well, it appears that Rodgers has extracted wisdom from his previous mistakes and used it to set up the Foxes in a way that ensures defensively solidity, while also producing maximum attacking potency. The kind of combination that makes you title contenders.

One of the key weapons in Rodgers' arsenal is his side’s ability to keep the ball. Influenced by the success he experienced at Swansea with short passing, the 46-year-old has imposed a similar system on his current team.

Since he took over from Claude Puel, the Foxes’ average possession has increased by 5%, with Leicester also fourth in the passes completed charts this campaign.

As cliché as it may sound, ‘if you have the ball, the other team can’t score’, and Rodgers’ side newly increased possession facilitates the increased dominance they have enjoyed in games this season - limiting the opposition’s chances to score. Also key has been Rodgers' formation. In the rare eventuality of their attacking unit losing the ball, the Foxes vigorously counter-press - a tactic borrowed from Rodgers’ days at Swansea and Liverpool - before swifty retreating back into their original shape if they do not win it back.

It requires hard work, with Leicester’s players frequently topping the charts in distance covered, but it has also proved mightily effective as the team is leading the Premier League in tackles made this season.

The Rodgers’ era has also witnessed a dramatic increase in fouls committed. These are not however in the mould of Pep Guardiola’s tactical stoppages, but rather an unfortunate by-product of their exuberant pressing.

Morning all,
It's nearly December and Leicester are 2nd in the league
Lowest goals against in the league
One of the best teams to watch

The Pundits will still tell you we have no chance of competing with Liverpool, man City, Chelsea

Always the underdogs
And I love it#lcfc

Though Rodgers' shape has largely been analysed holistically so far, the real key factor in its success is Wilfred Ndidi.

Often left isolated as the opposition counters due to his offensively inclined midfield partners - James Maddison and Youri Tielemans - Ndidi’s octopus-like tackling ability and telepathic reading of the game has frequently acted as a cheat code for Leicester this season, often getting them out of trouble when the opposition has broken the lines.

A song often heard on the Filbert Way terraces is: “Wilfred, Wilfred Ndidi will get the ball the ball from you”. And so it has proved, time and time again this season. 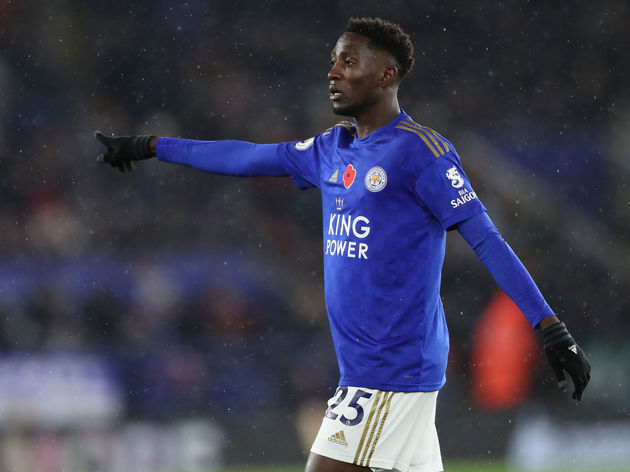 As much as Rodgers’ tactical changes have a significant impact on Leicester’s incredible defensive record, the Foxes have also been aided by stumbling across the second best centre-back pairing in the league in ​Caglar Soyuncu and Jonny Evans.

Few would have predicted that selling starting defender Harry Maguire to Manchester United at the beginning would improve their defensive record, and yet that is how it’s come to pass.

This perfectly suited pairing have helped Leicester to average just 0.63 goals conceded per game since Rodgers took over. Though they are admittedly massively over performing in xG at both ends of the pitch, if they

can replicate that figure for the remainder of the season, they will finish the 2019/2020 campaign with a better defensive record than nine of the last ten Premier League champions.

Perhaps Brendan Rodgers has finally added the string of ‘defensive organiser’ to his already impressive managerial bow and for that reason, Leicester really need to start being considered genuine title challengers.