​The Emirates Stadium is poised for one of its lowest-ever attendances when Arsenal host Eintracht Frankfurt in the Europa League on Thursday night.

While Frankfurt fans are banned from attending due to a UEFA sanction for previous crowd trouble, that's not the only reason for a predicted low turnout.

The Gunners were booed off the pitch after their 2-2 draw with Southampton over the weekend and a poor string of results has seen the pressure build on boss Unai Emery.

Some of ​Arsenal's best results this season have come in this competition that the Spaniard won three times in a row as manager of Sevilla, and a victory would seal the progression into the next round with a game to spare.

But, with ​rumours rife about his future, it now seems a matter of when rather than if for Emery who could prolong his stay just a little with a victory. This is total insanity 

A skirmish broke out between Freiburg and Frankfurt after the home team manager was deliberately clattered by an opposition player!

The visitors, on the other hand, will be without first-choice goalkeeper Kevin Trapp who has a shoulder injury.

However, captain David Abraham - who received a ​seven-week domestic suspension after deliberately colliding with Freiburg coach 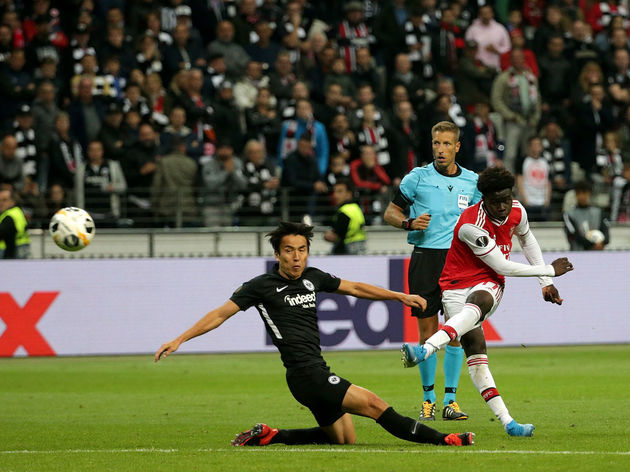 The two sides have only met once before, which was, of course, in the opening game of the season's Europa League group stages.

On the day goals from Joe Willock, Bukayo Saka and ​Pierre-Emerick Aubameyang gave Arsenal a 3-0 victory.

Frankfurt still had plenty of chances though and the Gunners had back-up goalkeeper Emiliano Martinez to thank for keeping a clean sheet. Arsenal have quite frankly been terrible this season. The air of optimism created by a series of impressive summer transfers evaporated almost immediately after series of consistently disappointing performances.

The Gunners have not won a single game by more than one goal in the Premier League and, despite the attacking talents of Pierre-Emerick Aubameyang, ​Alexandre Lacazette, Nicolas Pepe and ​Mesut Ozil, they somehow still have a negative goal difference.

The poor form has led rumours to surface that either this game or Sunday's fixture at ​Norwich will be Unai Emery's last as Arsenal boss. Eintracht Frankfurt, meanwhile, have hit a poor run of form after a decent start to their​ campaign, which included a 5-1 win over ​Bayern Munich. They currently sit 10th in the Bundesliga.

Without their attacking triumvirate of Ante Rebic, Sebastian Haller and Luka Jovic, they don't quite carry the same threat as last season. However, Portuguese forwards Andre Silva and Goncalo Paciencia will fancy their chances against a leaky Arsenal defence. With Arsenal's current form predicting them to win - even at home in a Europa League game - seems foolish.

The Gunners face a tough task against a decent Eintracht Frankfurt side, and the youngsters might struggle to get all three points