​Manchester United are expected to take a young squad to Kazakhstan for Thursday night’s Europa League clash with FC Astana, likely providing some respite for several senior stars ahead of the busy imminent festive period.

United have already booked their place in the Europa League knockout stages after taking 10 points from their opening four games. It means Ole Gunnar Solskjaer can afford to rest key starters and hand first-team opportunities to younger talents. BBC Sport journalist Simon Stone has described it as a ‘very young’ United squad that will be making the trip to Astana – the city was formally renamed Nur-Sultan earlier this year but the club has so far retained the original name.

Sky Sports reports a similar story, adding that Nicky Butt will be joining the travelling group. Butt was previously head of the academy and has since been tasked with overseeing the development of academy graduates in the step up to first-team level.

His presence is enough of a cue to suggest plenty of youngsters will be going to Kazakhstan. Sky’s report adds that first-team coaches Michael Carrick and Kieran McKenna will be staying in Manchester to work with senior players who aren’t making the trip. 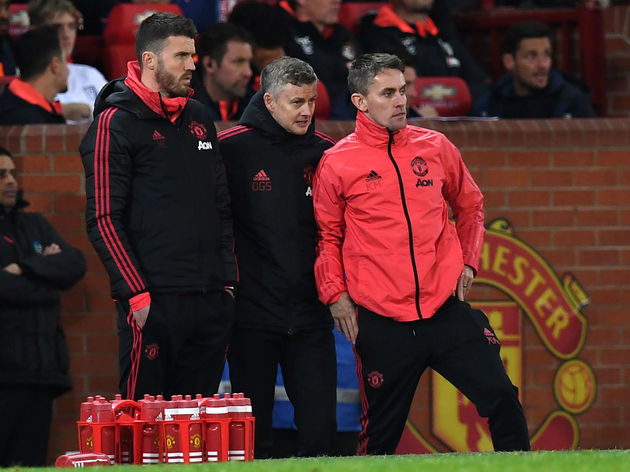 United face Aston Villa in the Premier League on Sunday, but then have two further games in quick succession against Tottenham next Wednesday and Manchester City three days after that.

It is not clear exactly which senior players will be left behind and which youngsters will be going in their place. But one has to imagine the likes of Marcus Rashford, David de Gea, Harry Maguire, Anthony Martial and Daniel James could all have the night off.

Brandon Williams is among those expected to be get more game time after taking over as starting left-back in recent weeks. There could well be possible a debut for right-back Ethan Laird, who previously made the bench against FK Partizan in Belgrade.

Teenage midfielder James Garner has increasingly been part of the first-team picture in recent weeks, while the likes of Angel Gomes and Tahith Chong could also be recalled. United’s Under-23 squad played on Friday night and haven’t got another official game until 4 December in the Football League Trophy. That frees up others for potential chances, so don’t be surprised to see the likes of Dylan Levitt, Largie Ramazani, Etan Galbraith included.

The trip to the Kazakh capital is a 7,000-mile round trip. The city is closer to the borders with China and Mongolia than it is to the rest of Europe, while freezing outside temperatures that are currently forecast as -14c on Thursday night have already come with a warning.