​Juventus host Atéltico Madrid at the Juventus Stadium in the Champions League on Tuesday night, and can secure top spot in Group D with a win.

The Old Lady go into the game off the back of five straight victories in all competitions, and will be hoping to make it six.

However, Maurizio Sarri's side face a tough test against an Atléti team that are famed for defying the odds.

With an entertaining title race with ​Inter Milan on the cards, Juve will want to get European qualification out of the way so that they can focus on winning a ninth consecutive Scudetto. 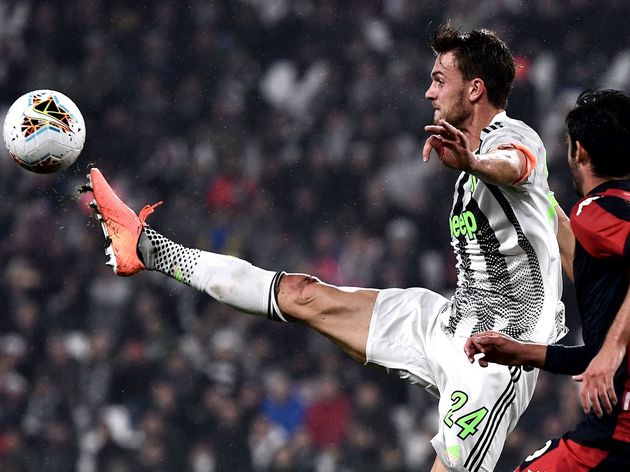 Wojciech Szczesny (GK) - One of a number of players that ​Arsenal let go for​ too little, Sczcesny has proved to be yet another bargain for ​Juventus. The Pole has taken over the number one shirt from club legend Gianluigi Buffon with style and he'll be hoping to keep a sixth clean sheet in just 12 games.

Juan Cuadrado (RB) - Another who couldn't reach his full potential in the Premier League, Juan Cuadrado has shown his true quality in a Juventus shirt. The Colombian has been fielded at right-back recently by Maurizio Sarri despite naturally being a winger, and has done so well that he has kept summer signing Danilo out of the side.

Daniele Rugani (CB) - Injuries to Georgio Chiellini and Matthijs De Ligt, mean that Juventus are going to have to most likely field their fourth choice centre back on Tuesday night. Rugani was linked with a move away in the summer, and after having appeared only twice this season, you'd expect that to happen sooner rather than later.

Leonardo Bonucci (CB) - Now the senior defender at the club due to Chiellini's injury, Leonardo Bonucci has been in fine form yet again this season. His performances have won over the Juve faithful who may well have questioned the decision to re-sign the Italian after he jumped ship to ​AC Milan for a season.

Alex Sandro (LB) - If it weren't for possibly the greatest left-back in a generation - ​Marcelo - Alex Sandro would have many more than the 23 caps he currently has for Brazil. The 28-year-old has been the model of consistency since his move from Porto in 2015, and will be desperate to add a Champions League medal to his plentiful collection. Miralem Pjanic (CDM) - Replacing a player as good as Andrea Pirlo was never going to be easy for Juventus, but in Miralem Pjanic, they may well have found the next best thing. The Bosnian dictates play from deep in a manner that allows Juventus' exciting forward line to flourish. Expect him to run the show yet again against ​Atletico Madrid.

Aaron Ramsey (CM) - Injuries have meant that ​Aaron Ramsey has made something a slow start to life in Turin, but the Welshman will be hoping to stay fit for long enough to earn a starting place in Juventus' ridiculously talented midfield. The former Arsenal man brings goals in a manner that no other Juve player does in the middle of the park, and is key to Sarri's plans.

Blaise Matuidi (CM) - It's difficult to think of a more underrated player than Blaise Matuidi. One of the myriad of free transfers Juventus have excelled in acquiring over the years, Matuidi's selfless and endless running for the team allows others to thrive. In a game against a team as hard working as Atlético his energy will be key. Cristiano Ronaldo (LW) - This season has not been a vintage one for the five-time Balon d'or winner. ​Cristiano Ronaldo only has one Champions League goal and seems to have fallen out with boss Maurizio Sarri, after the former ​Chelsea boss subbed him against AC Milan. He appears to have recovered from his mysterious knee injury, and will still be a threat on Tuesday.​

Gonzalo Higuain (CF) - It seemed that Higuain's time at Juventus was done after the Old Lady spent the whole summer trying to sell the Argentinian. But he refused to leave, and has established himself as a key player in Sarri's side, netting twice and assisting thrice in his last three games.

Paulo Dybala (RW) - Another who Juventus tried to sell this summer Dybala has stuck around to establish himself as a key cog in Maurizio Sarri's transitional team. ​Tottenham and ​Manchester United fans will be wondering what might have been as the Argentinian has popped up with four goals in 11 matches this season.