Manchester City have been dealt another major injury blow, with top scorer Sergio Aguero ruled out of action for 'a few weeks' - keeping him out of December's Manchester derby.

The striker pulled up with 13 minutes remaining of the ​2-1 victory over Chelsea, inciting fears that he could join Aymeric Laporte and Leroy Sane on a high-profile long-term injury list. 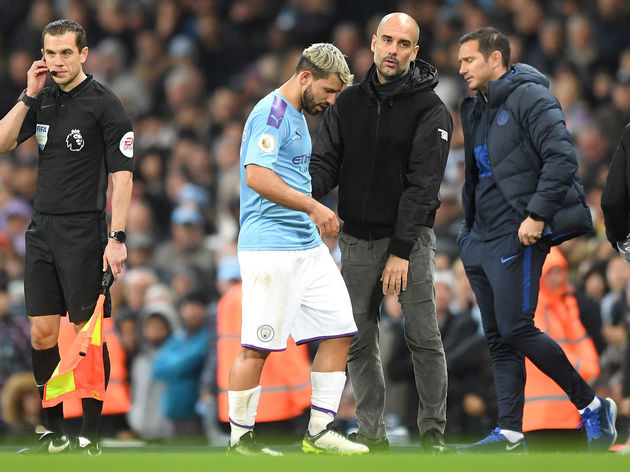 Those fears were particularly pertinent in the face of a potentially definitive period, with that all-important derby on 7th December and a clash with Arsenal a week later on the immediate horizon.

But they will have to get through without their primary talisman, as Pep Guardiola confirmed on Monday that the muscle issue picked up by ​Aguero during Saturday's win should keep him out for 'a few weeks', keeping him out until at least after the derby.

"We will miss Sergio. We have had some problems with injuries but we will wait for him and meanwhile we have Gab and Sterling who can play in that position," Guardiola on Monday.

PEP: We will miss Sergio. We have had some problems with injuries but we will wait for him and meanwhile we have Gab and @sterling7 who can play in that position.

We will live without him for a while.

"We will live without him for a while."

With eight games facing City in less than four weeks, starting with Tuesday's trip to Shakhtar in the Champions League, it will be tough for Guardiola's side to get through it without their main goal threat. But the manager says they are up to the task.

"It's the toughest period happening now," he went on, as quoted by ​Sky Sports. "It's a lot of games but it's what it is. My advice to my players and myself is not to think too much. We have enough good players and the mentality will give us extra. Maybe it will help us. "I never came here and said 'oh, we didn't have this player'. I am so sorry for them but they have to recover individually. We are going to wait but that is why we have a good squad. It's the best thing to move forward. People don't care if you have injuries. Find the solutions you have to find."