With his first game with the Lilywhites done and dusted, picking up a 3-2 victory at the London Stadium over the weekend, the Portuguese boss may be opting for a similar lineup come Tuesday.

However, his decision to leave Christian Eriksen on the bench for his first game in charge means discussions surrounding the Danish international’s possible start in the Champions League fixture have already started. But with Mourinho already raising concerns about the 27-year-old’s commitment to the club, it looks like he’ll be missing out again.

So, who should make it into the squad? Let’s take a look at their predicted starting XI for the game. Serge Aurier (RB) – After Aurier’s sensational display at the weekend, expect to see 26-year-old start again on Tuesday. Although, the Ivorian’s performances with Spurs have often been questioned, it will be hard for Mourinho to say no after his game against the Hammers which saw the right-back put in a number of strong challenges as well as assisting ​Harry Kane’s goal in the second half.

Toby Alderweireld (CB) – Alderweireld should also the make the cut come Tuesday night. The Belgian started against West Ham on Saturday and as Mourinho was so desperate to sign the player back at Manchester United, his place in the starting XI should be safe.

Davinson Sánchez (CB) – The centre-back is also likely to continue in the starting XI for ​Spurs. If the Colombian can avoid any injuries, he could become a regular starter under Mourinho and should find himself on Tottenham’s back line on Tuesday evening.

Danny Rose (LB) – As Ben Davies limped off the pitch on Saturday and remains a doubt for Tuesday night’s fixture, Rose should start as his replacement against Olympiacos. Whether the English international becomes a firm favourite under new boss Mourinho, however, is still up for debate as Rose struggled under Mauricio Pochettino and other contenders will be hoping to secure their place as the regular left-back. Eric Dier (DM) – A man who fits under Mourinho’s tactics perfectly is, of course, Eric Dier. The 25-year-old started against West Ham, taking on the defensive midfield role - and is likely to start in a similar formation come Tuesday.

Tanguy Ndombele (CM) – Ndombélé is likely to make his return on Tuesday after suffering with a groin problem during the past weeks. It will be his first start under new boss Mourinho so the Frenchman will be hoping to make an impression to secure his place as a regular starter in the squad.

Dele Alli (AM) – ​Alli had a great game against the Hammers and is expected to flourish under his new boss. The midfielder has dipped in form over the past 18 months but if there’s anyone who can get him up and running again, it’s José Mourinho. 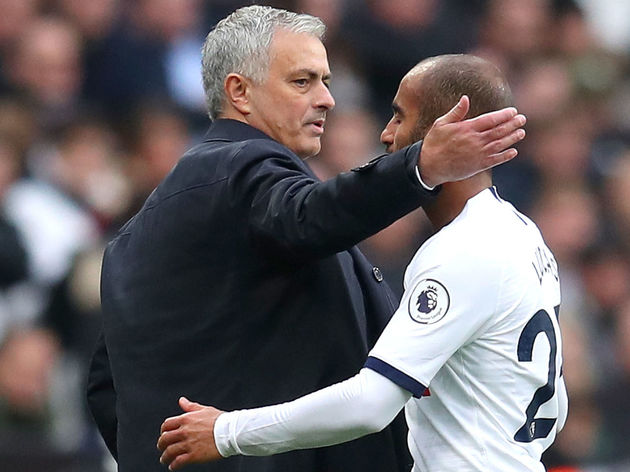 Harry Kane (ST) – The striker is one of Tottenham’s most valued assets and will be crucial in their hopes of making it the knockout stages of the Champions League on Tuesday. Despite the Englishman’s close relationship with ex-boss Mauricio Pochettino, Mourinho will hope he can win over the forward as he continues his great spell of form.

Son Heung-min (LW) – Not exactly a huge surprise, but another one of Tottenham’s most valued players will be expected to back another start during Mourinho’s second game in charge. The South Korean netted in a goal against West Ham at the weekend and will also be on great form for the Champions League fixture.