Sheffield United snatched a late equaliser against Manchester United to earn a 3-3 draw at Bramall Lane, after the visitors had clawed their way back from two goals down.

The Red Devils failed to heed the warning signs of Sheffield United's early long balls over the top, and paid the the price in the 18th minute. Phil Jones' inability to deal with a long ball into the channel enabled Lys Mousset to shrug him off with ease and cross for John Lundstram, whose shot rebounded from David de Gea's feet to John Fleck and into the net to make it 1-0.

Mousset gets in behind Jones and pulls it back for Fleck to eventually scramble over the line.

The Blades doubled their lead on just 52 minutes, Lys Mousset starting and finishing a move that began with Manchester United's sloppiness in possession. The Frenchman robbed the ball in his own half, exchanged a pass with John Fleck and drove at United's weak defence before slotting home.

United completed a remarkable comeback in just seven second half minutes, completely against the run of play. Brandon Williams pulled one back in the 71st minute, unmarked at the back post for Daniel James' cross and Mason Greenwood poked home Marcus Rashford's ball into the box just five minutes later to equalise. It was then Rashford's turn to score, making it 3-2 by nervelessly tucking home James' cutback in the 79th minute.

But the hosts weren't to be denied, with Oli McBurnie benefiting from pinball in the box before firing past the flailing De Gea, the goal standing after a lengthy VAR check for a potential hand ball.

For 70 minutes, you wouldn't have noticed the difference. ​Sheffield United were as solid as ever at the back and continued to play their usual brand of football with trademark confidence. Chris Wilder deserves plenty of credit for creating a system and philosophy that isn't disrupted by personnel changes.

Sadly, there was to be a monumental collapse between the 70 and 80 minute mark. After defending so well and dominating the game, the Blades struggled to deal with the pace of the Red Devils' attackers as they finally upped the tempo.

But Wilder's side are a resilient bunch and drew a line under their brief defensive slump by grabbing the late leveller their dominance deserved. Make no mistake, Wilder will still be seething about those uncharacteristic ten minutes. The Blades' midfield bullied their counterparts in the centre of the pitch, and John Fleck was absolutely key to their dominance. While United turned in a dreadful performance, Fleck was a ray of sunshine - constantly winning the ball back as Fred and Andreas Pereira daydreamed in possession.

Not typically known for his attacking prowess, the Scottish midfielder helped himself to a goal and an assist against his below-par opposition. The timing was perfect as he arrived into the box to score, while his weight of pass ensured Lys Mousset had space to exploit United as he added a second.

United's late goals will paper over the cracks, but this was an abysmal performance for the vast majority of the match. 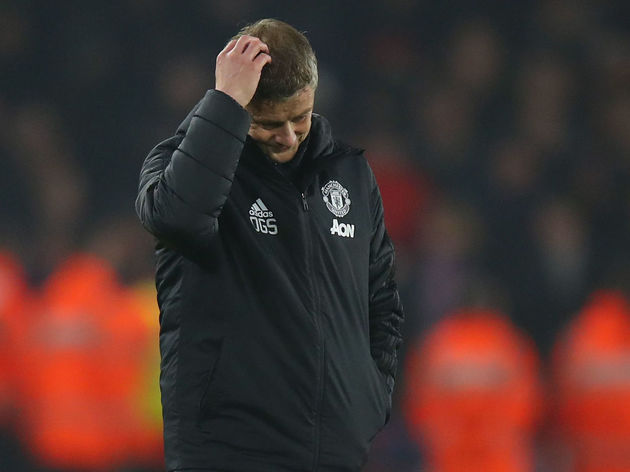 Ole Gunnar Solskjaer handed Phil Jones his first start of the season and matched Sheffield United's formation by switching to a back three on Sunday. It was a move supposed to provide stability and cover for the lack of midfield options, but sadly that's not what transpired from United's point of view.

Jones, Harry Maguire and Victor Lindelof were pulled apart by the Blades movement and intensity of passing - highlighted by the move that led to David de Gea's sublime double stop.

After all the investments made @ManUtd still dont have a clue on how to defend. Sheffield is toying with United's defence.

Phil Jones is, without question, the worst defender in the Premier League! @ManUtd need to offload him in January. He has never been up the standard and is a liability in this defence! #Useless

Jesse Lingard replaced Jones at the interval and Solskjaer switched to a back four, yet the extra body made little difference to the midfield battle and United clearly lacked desire until the 70th minute.

Williams' goal against the run of play briefly rejuvenated United, but for a side with such attacking talent their star shone far too briefly. Solskjaer must take the blame for setting up his side in completely the wrong fashion, but the player's lack of heart will disappoint the fans.

Pace is a great leveller and in the brief period that ​United upped their energy levels above the bare minimum, Daniel James made it count.

After beating his man successfully for seemingly the first time on Sunday evening, James put in an excellent cross that arrived at Brandon Williams' feet for United's first goal. Their third, meanwhile, was a product of James' desire to get beyond the Blades' defence, before an excellent cutback provided Rashford the time and space needed to slot home. Sheffield United face a difficult trip to face Wolves in their next Premier League outing, before a run of fixtures that they'll be confident of collecting points from. The Blades will then face Newcastle, Norwich, Aston Villa, Brighton and Watford between December 5th and Boxing Day.

Manchester United will travel to Astana in Europa League action, before taking on Aston Villa, Tottenham and Manchester City in the space of a week.