Aaron Ramsey's double sealed Wales' place at Euro 2020, the Juventus midfielder the difference in Tuesday's 2-0 victory over Hungary in front of a s

Wales were ahead inside 15 minutes, Gareth Bale and Ramsey combining on their first start together for just under a year. The Real Madrid forward was released down the right flank by Joe Morrell, cut back on to his favoured left boot and delivered an inch-perfect cross for Ramsey to head beyond Peter Gulacsi.

Wayne Hennessey preserved Wales' lead with a fantastic double save in the 33rd minute, denying two Hungary players from close range in the visitor's first attack of note - despite their domination of possession.

Gareth Bale delivers a superb cross into the area and Aaron Ramsey heads home to give Wales the advantage in Cardiff!

Wales doubled their lead just two minutes into the second half, and it was Ramsey who once again demonstrated composure when it mattered most. Kieffer Moore flicked Ben Davies' free-kick towards goal and the Juventus midfielder found himself in plenty of space to slot home.

James and Ramsey then combined on two occasions, almost adding to Wales' tally. The Manchester United forward curled just over the bar from the edge of the box, before Ramsey's low shot was blocked. With the home crowd roaring them on, Wales were professional and controlled their nerves to seal their place at just their third major tournament.

You wait 58 years to qualify for a major tournament and then two come along at once!

Well, within the space of four years anyway.

Defeat to Hungary in June left Ryan Giggs' side with just three points from as many games, but Wales had shown great character to turn things around and headed into Tuesday evening unbeaten in the four qualifiers since.

Tactically, the first half was one of Giggs' finest in his Wales tenure. They allowed Hungary 59% of possession, pressed them high at the right times and used the pace of their attacking players to counter at breakneck speed whenever they retrieved the ball in their own half. 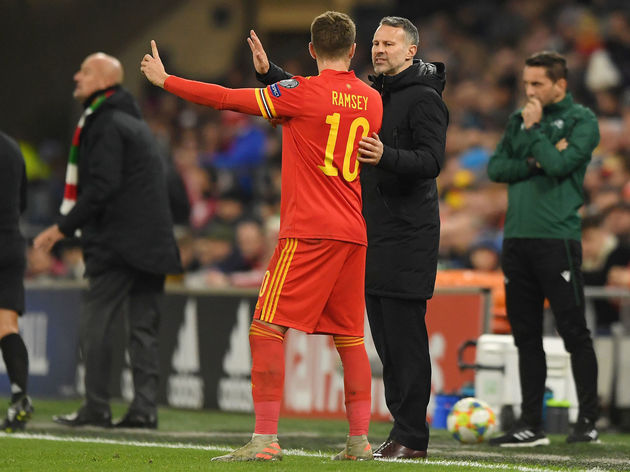 They should have doubled their lead in this exact fashion, as a rapid counter-attack saw them transition from Hungary penalty appeal to Moore heading wide in just over ten seconds. ​Bale, Ramsey and James were all involved in the build-up, yet sadly the Wigan striker's header sailed the wrong side of the post.

The tempo might have dropped slightly in the first half's closing stages, but whatever Giggs said to his players at half time most certainly worked. The wind was back in their sails and they punished Hungary's sloppy defending to double their lead - from that point onward, it was a case of professionalism and cool heads to get across the line.

STAR PLAYER - Giggs pulled a tactical masterstroke, using the Bale-Ramsey smokescreen to quietly usher Joe Allen back into his starting XI and watch the Stoke player dominate the midfield battle. Ramsey's goals will steal all the headlines but, in a fashion fitting of Allen, his contribution was equally as important and much more subtle.

For all the talk of Daniel James' speed ahead of the game, it was Allen who caught the eye in the opening ten minutes and the 'Welsh Pirlo' seemed intent on breaking the record for distance covered by haring across the pitch. This set the early tempo and prevented Hungary from settling into any pattern, despite their superior possession.

It’s great to have Ramsay and Bale back but let’s not underestimate the return of the Welsh Pirlo. Welcome back Joe Allen. #WALHUN #TogetherStronger

Allen's energy was pivotal in Ramsey's goal. Breaking forward from his own half, he drew three Hungary players towards him and created the space for Connor Roberts who then released the equally-unmarked Bale.

Equally unrelenting in the second half, Hungary midfielders dropping deep to collect from their centre halves found Allen in tireless pursuit - which prevented Marco Rossi's side from developing any meaningful rhythm.

Once Wales were in pole position, Allen excelled at controlling the tempo and ensuring that Hungary never really created chances to get back into the game.

Superb play from Joe Allen to break up a Hungary attack. The midfielder is working tirelessly out there as always. #WALHUN

How on earth is Joe Allen not playing for a Champions League team? He’d improve Juve, Barca, anyone. And he’s playing for Stoke

Wales can now start the preparations for their second major tournament in four years - once the celebrations have died down at least. Instead of complex calculations revolving around Nations League paths, seeding and potential play-off draws, Wales' attention will turn to possible friendlies and the tournament draw.