But what good is it all if you can't rely on the officials in the middle to set the tone and match the standard of football on offer?

The most recent offering of 'not good enough' came during Chelsea's clash with Manchester United at Kingsmeadow, where a controversial penalty helped the home side maintain their

place at the top of the WSL table.

🙌 You can watch all the highlights from #WomensFootballWeekend NOW on The FA Player!

But that wasn’t the only poor decision of the game from Jack Packman, who was actually the third choice appointment for the game - after two other officials pulled out prior to kick off.

The problem is, WSL audiences are getting used to seeing questionable refereeing and it's in danger of becoming acceptable unless something is done by the game's governing body.

Before, these decisions were perhaps overlooked and ignored by the majority. But now - as the quality and the professionalism of the game grows - coaches, players and spectators alike are rightly raising concerns.

Since the 19/20 WSL campaign started in September, there has been an undeniable rise in public interest. Of course, the Women’s World Cup, which took place earlier this year, sparked a big interest in women’s football – and the clubs within England’s top division have been doing their best to continue the excitement. From as early as the first weekend of the season, the WSL was making history by hosting games at both the Etihad Stadium and Stamford Bridge, creating record attendances for clubs within the league. Fast forward to matchday six and the records have been broken once again – this time featuring a London derby between ​Spurs and ​Arsenal at the Tottenham Hotspur Stadium, with an impressive 38,262 in attendance.

Matchday six of the WSL, or ‘Women’s Football Weekend’ as it was also dubbed, also claimed record attendances at Kingsmeadow, as well as a Merseyside derby at Anfield between ​Liverpool and Everton.

That has led to talk of stadium expansion and, as a result, the feel good factor surrounding women’s football remains pretty positive.

But the black mark regarding refereeing performances is a stain that refuses to go away, with

the warning signs there last season for all to see.

Just ask Reading coach Kelly Chambers, who during the course of last season labelled the performance of referee Rebecca Welch 'abysmal' as her side slipped to a narrow 2-1 defeat to West Ham at the Madejski Stadium.

That day, a number of fouls went unpunished throughout the 90 minutes, with opposite number Matt Beard also expressing his frustration after the game at what he'd just seen. Sadly, this wasn't an isolated incident. 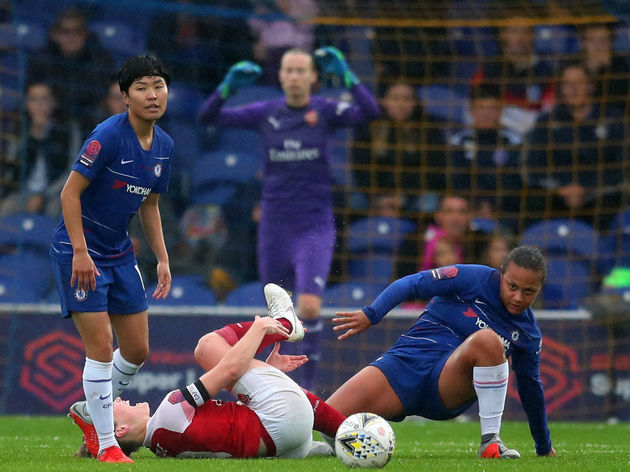 Months before, Arsenal captain Kim Little suffered an unfortunate leg break during the clash with London rivals Chelsea, caused by a dangerous two-footed lunge from Drew Spence. Again, the resulting punishment was lenient to say the least - Spence only receiving a caution despite sidelining her opponent for a prolonged period of time.

Have things improved at all? On the evidence of Sunday's between Chelsea and Manchester United, they have not.

The gulf in quality needed, compared to what we currently have, was summed up by one utterly embarrassing incident involving United's Amy Turner.

Penalised for an infringement by Packman and already on a yellow card, Turner should have been receiving her marching orders. Instead, teammate Abbie McManus was booked for the challenge instead. To add insult to injury, Chelsea were later awarded a penalty, even though Millie Turner clearly won the ball when duelling with Fran Kirby.

United boss Stoney summed things up aptly after the game, insisting (via the Telegraph) that "...the league needs to look at it. “It’s not OK. Where is the protection for the players? The decisions, for me, were embarrassing. "We want to put in good performances and, when referees are giving bad decisions that are killing the game, it's hard. I hope that they will watch the game and look at how badly they did. I thought they were appalling today.”

“We are a professional game. We have to address the level of refereeing. We work hard week in, week out. My players are honest, hard-working, driven - they deserve better than that. It was a 90-minute poor performance. He [Packman] has apologised but that’s too late.”

Packman's apology is a sad indictment of where we currently find ourselves. The 22 players on the pitch? Better than ever. Interest in the stands? Never been greater. The coverage of women's football in the media? Growing by the day. The quality of officials? Same old, same old....