Switzerland Under-17 World Cup Winners: Where are They Now?

Almost ten years ago to the day, the start of Switzerland's golden generation announced themselves to the world.

At the 2009 Under-17 World Cup, the Schweizer Nati met hosts Nigeria in the final. They had won all six games en route under the guidance of Dany Ryser, including dramatic victories over Germany, Brazil and Japan.

In their first and only appearance at a World Cup final, Switzerland won 1-0 thanks to a fantastic header from Haris Seferović. That triumph was the start of something special, with some of those World Cup winners going on to play for the senior team under Vladimir Petković.

It remains one of the greatest nights in Swiss football history, but ten years on from that historic night in Abuja, where are the Swiss starlets of 2009? Siegrist was Switzerland's number one at the World Cup, having joined Premier League side ​Aston Villa ten months earlier. He won the Golden Glove at the end of the tournament, beating the likes of ​Marc-André ter Stegen and Alisson to the award.

After seven years, four loan spells and zero senior appearances with the Villans, Siegrist was sold to Swiss Super League side Vaduz in 2016. He now plays in Scotland for Dundee United, who he has kept six clean sheets for this season.

Then of FC Basel, Kamber played the full 90 minutes in the final. He captained Switzerland in their semi-final victory over Colombia, playing six of the seven games in Nigeria.

Kamber went on to play for the Under-20s, though has never earned a senior cap. He has played his entire career in Switzerland, and is now with top-flight side Neuchâtel Xamax. Chappuis had been in Grasshoppers' academy for six years when he became a World Cup winner, spending another two years with GC.

The midfielder's Thai roots led to him moving to Thailand to join Buriram United in 2013, where he now plays for Muangthong United. Chappuis switched international allegiance to Thailand in 2014, with five goals and 20 caps for their senior national team. Veseli was the captain of the World Cup winning Switzerland side, and was the one who had the honour of lifting the trophy in Abuja.

The centre-back is another player who later opted against playing for Switzerland, rejecting them and Kosovo to play for Albania. Veseli has earned 22 caps for the Eagles since his debut on this day in 2015, playing his club football at Serie B side Empoli. The World Cup win gave Buff a big boost for club and country, as he rose up the ranks for Switzerland and FC Zürich.

He made 216 senior appearances for FCZ, before spending time in Spain and Cyprus with Real Zaragoza and Αnorthosis Famagusta respectively. After being released by the latter this summer, Buff returned to Switzerland to join Zürich's bitter city rivals Grasshoppers. Seferović is one of just three players from the squad who went on to become first-team regulars. He was the tournament's joint-top goalscorer with five goals, included the winner in the final.

After spending time in Switzerland, Italy, Spain and Germany, the Swiss talisman now leads the line for Portuguese champions Benfica. Seferović is also Switzerland's starting striker, with 18 goals in 64 caps since his senior debut in 2013.

Now 27 years old, Seferović has been fantastic for the Swiss. His highlights include scoring the winning goal against Ecuador in the 2014 World Cup, and netting an incredible hat-trick against Belgium in November 2018, as Switzerland won 5-2 to qualify for the Nations League finals. Ben Khalifa was one of Switzerland's brightest stars at the 2009 World Cup, as he came away with the Silver Ball Award. A move to ​Bundesliga club Wolfsburg looked to be his big break, but unfortunately it never really happened for the talented winger.

He was loaned out three times before being sold to Grasshoppers in 2014, then leaving for Turkey to join Eskişehirspor the following year. Spells at Lausanne-Sport and St. Gallen followed for Ben Khalifa before a return to Grasshoppers in July, where he has six goals this season. Xhaka is another player who rose through the Swiss ranks, going right up to the first team. The midfielder was one of FC Basel's most exciting youngsters at the time, and two-and-a-half years later he earned a move to Borussia Mönchengladbach.

For the national team, Xhaka has been nothing short of fantastic. He made his senior debut at 18 years old in 2011, and has since captained the Schweizer Nati on ten occasions and scored at two World Cups, including in Switzerland's dramatic 2-1 win over Serbia in June 2018.

Four years with the Foals led him to ​Arsenal in 2016, where Xhaka has been ever since. Despite the recent chaos at the Emirates, Xhaka has still achieved a huge amount in his career, and remains one of Switzerland's greatest players of recent times.

Read my take on Granit Xhaka's situation at Arsenal 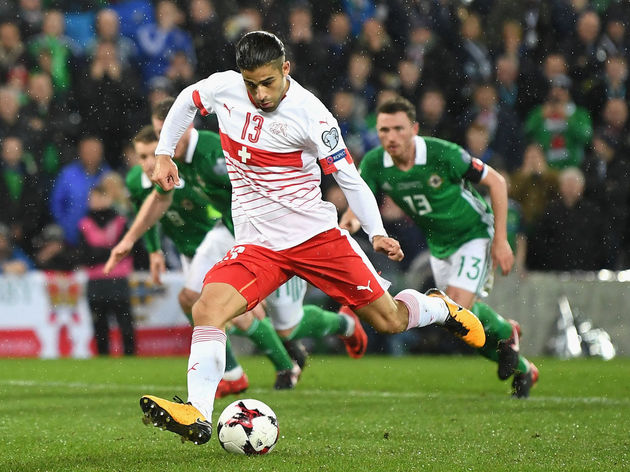 Completing the trio of World Cup winners who made it to the senior side, Ricardo Rodríguez scored three goals at the tournament.

He made his senior debut for FC Zürich four months after Switzerland's triumph, before joining Wolfsburg in 2012. Rodríguez made 184 appearances in Germany before moving to ​Serie A to sign for Milan in 2017, where he is closing in on a century of games for the Rossoneri.

Since making his senior debut in 2011, Rodríguez's prowess from the penalty spot has been crucial. His notable spot kicks include the winner against Northern Ireland which sent the Swiss to the 2018 World Cup, the one that kickstarted the comeback against Belgium, and the equaliser against Portugal in the Nations League semi-final in June.

The youngest player in Switzerland's starting XI, Martignoni remained at Locarno until he joined Aarau in 2013.

He then moved on to FC Lugano, before a successful loan spell at FC Chiasso saw him join permanently in July 2018. Martignoni now captains the second-tier side, who are bottom of the Swiss Challenge League. Finally, Pajtim Kasami, who has been everywhere since that night in Nigeria. He has played football for seven different clubs in Italy, Switzerland, England and Greece, including three seasons in the ​Premier League for ​Fulham.

He is best known to English fans for that goal against Crystal Palace in October 2013, as his spectacular volley was nominated for the FIFA Puskás Award. Nowadays, Kasami plays his trade for FC Sion, with eight goals and two assists this season for the Super League side.