Looking at the Positives & Negatives of Real Madrid's Season So Far

​One loss in 12 La Liga games and second in the division only by the case of goal difference. All seems rather rosy at Real Madrid, don't you think?

Then why is that Zinedine Zidane has faced severe scrutiny for large parts of the campaign and it all doesn't seem quite right in the Spanish capital? Well, there are reasons to argue this isn't the case, while equally you could look upon Madrid's season so far and think they're lucky to be where they are.

Whatever side of the fence you may perch yourself on, there are certainly positives and negatives to have taken from the season thus far, as come into what is roughly a third of the way through the season.

Therefore, here are two apiece that are both cause for concern, and indeed for optimism, at this stage of the campaign.

Not 'alf bad from Zidane's men, you must say. Especially when you take into account the number of injuries his side have been plagued with already this season, and even more so when you consider those results have left them joint-level on points with ​Barcelona.

All in all, it has been a solid start to the current ​​La Liga season for Los Blancos, who head into this international break firmly in the title race, something few expected after their woeful 2018/19 season. It isn't just the points total that should be commended either, but indeed the manner in which they've achieved those wins. 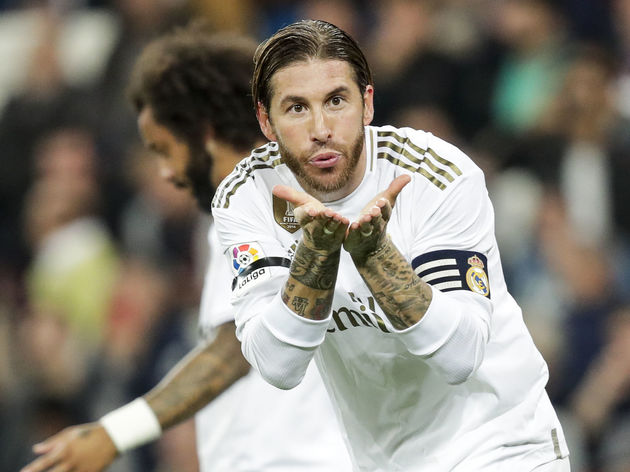 Netting 25 goals thus far, when faced with the supposed 'lesser' sides in the division Madrid have put them to the sword. With 4-0 and 5-0 scorelines against the likes of Eibar and Leganes, it seems as if the shackles have come off at the right times, with the ​Madrid of old coming to the fore in convincing victories.

Furthermore, when facing off against sides towards the top end of the table, Real have stood strong, securing a draw away at ​Atletico Madrid while more impressively leaving Seville with all three points. The lack of consistency at the back has not been problematic, however, barring the obvious humbling they had at the hands of Paris Saint-Germain in the Champions League, that is. With an injury-free defence, it will be interesting to see just how much better this side can get.

Negative - Where is Eden Hazard? Granted, injury has limited the Belgian to just seven league outings, but the ​Eden Hazard that Madrid forked out a whopping £150m (potentially) for has yet to hit top form. In fact, he's barely hit fourth gear in an underwhelming start to his career in Spain.

The benefit of the doubt must be given to Hazard for getting accustomed to a new league etc., but he did spend the majority of pre-season with the club and has still not managed to reach the dizzying heights of his final season at Chelsea - or indeed the two seasons before that. Or indeed pretty much every season of his career barring one.

Furthermore, the quality of opposition in La Liga is not of the same standard across the board as that of the Premier League, so his return of just one league goal and a solitary assist does not make for great reading.

There is no doubting that he will find his form eventually. Talent is there that has, and will, be there for many years to come. And, when you take into account Los Blancos' league position, Madrid fans must be licking their lips at the possibilities for the squad once Hazard hits peak form. That may be hard to fathom considering their league position and the fact they are comfortably second in their Champions League group, but there are distinct chinks in the Real Madrid armour.

They have only suffered one loss so far this season in La Liga, but it came against lowly RCD Mallorca on the back of a home win over Granada. That result is the perfect example of why there are murmurs of discontent surrounding Zidane.

You need to look at the draws they've managed in the league also. Yes, only one loss is commendable, but they've scraped single points off of the likes of Real Betis and Real Valladolid at home while a 2-2 draw away at Villarreal is hardly inspiring.

Taking a look at the Champions League prompts similar emotions. Sure, they're second in the group and it would take a monumental collapse to see them not qualify in second place, but drawing 2-2 at home to Club Brugge was an all-round dreadful showing, while in their next home clash in Europe they trounced Galatasaray 6-0.

This level of inconsistency is arguably Zidane's most important area to fix. Whether he can't get his team fired up for the occasion or the pressure is getting the better of them, it must be looked into over the international break if they are to sustain a challenge for trophies in Europe and domestically.