Just in case you needed telling again, all is not well on the lilywhite side of north London at the moment and bar an astonishing Champions League run last season - which in fairness, is a pretty big 'bar' - things haven't been great for a while now.

Spurs currently sit 14th, yes, 14th in the Premier League and are considerably closer to the relegation zone than they are to the top four. Quite frankly, they are way off the Leicester's and the Chelsea's at the moment. The only thing they have going for them is that Arsenal are a bit of a laughing stock as well, but even they are three points above the Lilywhites in the table.

So, as the under-pressure Mauricio Pochettino prepares to resurrect the current crisis at the club over the international break, let's take a look at some of the negatives and a few more negatives of Spurs' season thus far, oh wait, there is a positive in there as well. Despite their inactivity in recent transfer windows ultimately being a source of the current problem, there's no doubt that Levy and co. did a good job in the summer with who was brought in.

Giovani Lo Celso, who's currently on-loan at the club but with an obligation to buy, has impressed in his small sample size up to this point.

Then there's Tanguy Ndombele, who's well on his way to becoming one of the best midfielders in the world - fitness permitting.

Finally, the deal to bring in Ryan Sessegnon from Fulham could prove to be a huge one down the line.

While the teenager proved to be a competent winger at the Premier League level last season, at left-back is where he could become a star - even better than the Danny Rose

Negative - Inability to Break Teams Down While draws or defeats at home used to be attributed to 'well, it was one of those days' or 'the keeper had a blinder', Spurs can't even blame those factors anymore.

In home games against Newcastle, Watford and Sheffield United, Spurs racked up a mighty nine shots on target and came away from those games with two points.

This Spurs side has proven time and time again that they're incompetent of breaking teams down, except Sheffield United

The football's slow, it's dull, it's predictable and Pochettino has often relied on individual talent to break a side down; Ndombele (v Villa), Heung Min-Son (v Sheffield United) or Dele Alli 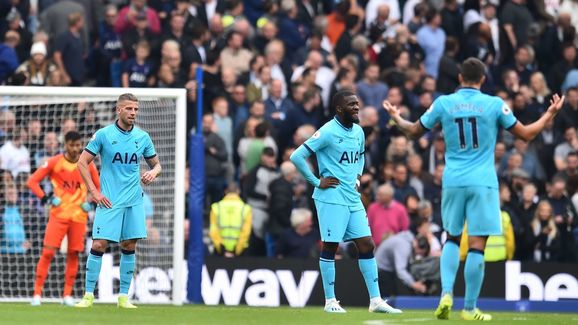 After having the second-best away record in 2017/18 and remarkably, the third-best last season, Spurs are yet to win any of their six Premier League

While three of those six came against last season's top-six and another at the high-flying Leicester, in the other two they either looked void of any attacking identity (against EvertonBrighton).

Also, let's not overlook that they were beaten at Colchester in the Carabao Cup as well with what was close to a full-strength XI.

Despite a European run last season that was built on adversity and character, this current Spurs side - which isn't too dissimilar at all from last year's side - looks shot of confidence when on their travels, well, apart from when they visit Belgrade. Cor, how good was it when Spurs had Rose and Walker bombing down the flanks servicing Harry KaneToby Alderweireld

The 2016/17 defence held the best record in the division, conceding just 26 times. Through 12 games this season, Spurs have already conceded 17.

While the two Belgians have future contracts elsewhere in mind, at full-back is where Pochettino's deepest problem lies.

Liverpool, especially, have proven how crucial your full-backs are in the modern game, but at the moment, Spurs barely have a competent one in their ranks: Aurier wants out, Rose is a shell of his former-self and Ben Davies is a steady-Eddie who's nothing more than a 7/10.