​Barcelona centre back Gerard Pique has admitted that his club's performances this season have not been up to their own high standards.

The defender has played in all but one of Coach Ernesto Valverde has come under pressure for his side's poor performances, and has faced calls to be sacked by some sections of La Blaugrana's support, after a 0-0 draw at home to Slavia Prague marked the first time they hadn't scored at Camp Nou in 46 games.

“We have won the last two leagues, we are the leaders in the league and in the Champions League and the criticisms we are receiving are excessive," he said. "Can we play better? Of course, but there is still a lot of the season left.

“Barça is the least result-based team in the world. Here it is not only worth winning. We have to win playing well and it is true that right now we are not at the level that we should be having the template we have.

"We have talked about it in the locker room. In addition, it is not the first time something like this has happened in all the years that I have been at Barça. But you have to be calm, not nervous.” 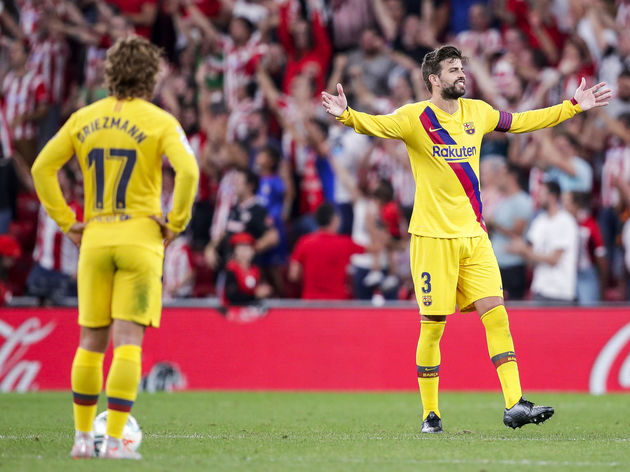 Never one to shirk a difficult question, the former Manchester United man also discussed the form of summer signing ​Antoine Griezmann, and admitted the Frenchman is still settling in at the Camp Nou.

“He [Griezmann] always triumphed in both Real [Sociedad] and Atlético, but it is true that he has come to a team, Barça, which does not play for him" he said.

"In that sense he knows how to find his space, but he will find it because he has a lot of talent. I particularly value how much it helps us in defensive tasks. ”