​​Liverpool star Mohamed Salah has withdrawn from international duty for Egypt with an ankle injury, and worryingly his return date remains unclear.

The Red's number 11 is out indefinitely, making him a doubt for the upcoming matches with ​Crystal Palace in the league and Napoli in the Champions League. The league leaders will be hoping Salah is returned fit for their December clash with bitter local rivals ​Everton.

According to ​Sky Sports, the former ​Chelsea and Basel man will work away from ​Liverpool's Melwood training ground while he recuperates.

The Egyptian has been nursing the injury since then, but played in his side's emphatic 3-1 over title rivals and champions ​Manchester City, even scoring the reds' second goal, heading in from an Andy Robertson cross. 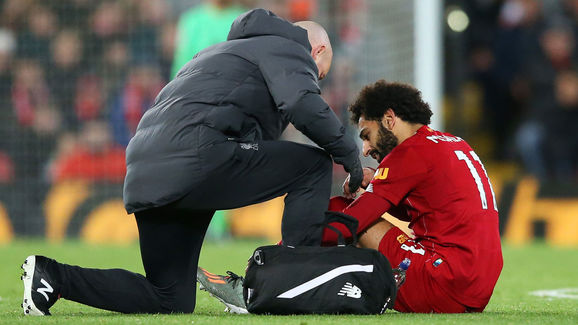 He has since been seen wearing a protective boot on his left foot before he withdrew from international duty on Tuesday. The 2018 ​Premier League Golden Boot winner missed his country's 1-1 draw with Kenya on Thursday night in the Pharaohs' opening Africa Cup of Nations qualifying clash. Egypt next face Comoros on Monday, but Salah will play no part.

Salah will be a big miss and Klopp will likely bring in Divock Origi or Alex Oxlade-Chamberlain to bolster the forward line as the German manager attempts to take the Anfield club to a first top-flight title since the 1989/90 season, 30 years ago.