Newly promoted United had an incredibly tough start to the 2019/20 campaign when they were tasked with facing reigning double cup winners Manchester City and reigning champions Arsenal in their opening two games, narrowly losing both by just a single goal. Since those unfortunate defeats, United have comfortably won all three WSL games they have played, without conceding a goal – that run extends to five in all competitions, including a 2-0 cup revenge against City.

Casey Stoney was nominated for WSL Manager of the Month for October, only losing out to Chelsea counterpart Emma Hayes. United forward Kirsty Hanson won the WSL Player of the Month prize, while defender Amy Turner also picked up the PFA version.

Where there was hopeful optimism rather than genuine belief ahead of the City and Arsenal games, now there is expectation that United can immediately ruffle the feathers of the big clubs.

On  in front of goal

Unbeaten Chelsea, who prevailed against Arsenal last time out to rise to the top of the table, are arguably a stronger side than the Gunners or City and it was only an uncharacteristic poor start to last season that prevented them challenging for the title.

In what will be the first ever meeting in any competition between Chelsea and United on Sunday 17 November, part of the FA’s celebratory ‘Women’s Football Weekend’, the visitors from Manchester will be aware of the size of the task in front of them.

Opta stats reveal that Chelsea have an incredible record against teams they are facing in the WSL for the first time, winning by a cumulative score of 14-0 in their last five such games.

Similarly, they are already in title winning form, with 13 points from the opening five games their joint best ever tally at this stage of a campaign alongside 2015 and 2017/18. In both of those years they went on to finish as champions. 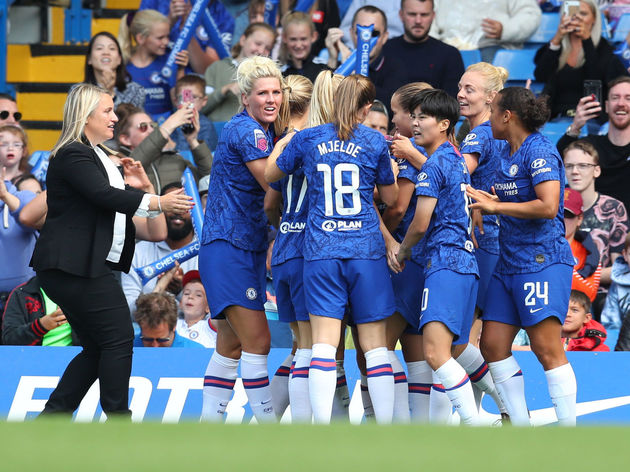 United must particularly watch out for the combination of Bethany England and summer signing Guro Reiten, who have created more chances for each other (7) than any other pair in the WSL so far this season. Both have two goals and one assist to their name, as does Ji So-yun.

Yet United themselves aren’t to be taken lightly either. As already mentioned, they have won three consecutive league games without conceding and are just one short of matching Sunderland’s WSL record of back-to-back wins for a promoted club, set in 2015.

Lauren James, whose older brother Reece coincidentally plays for Chelsea’s men, is likely to be United’s biggest attacking threat. The teenager is fast becoming one of the new stars of the WSL and has completed more dribbles (17 of 23 attempted) this season than anyone else.

Tickets for the 2pm kick-off at Kingsmeadow are available to purchase for £9 via Chelsea’s official website. Alternatively, the game is available to stream live and for free via the FA Player.