Porto 2-1 Benfica is part of 90min's 20 Greatest Matches of the Decade series. Follow the rest of the series over the course of the next few weeks.

​Long have there been two titans of Portuguese football. In fact, you need to go back to 2002 to find the last time a side other than Porto or Benfica were champions of the Primeira Liga.

None of those title races have matched the 2012/13 campaign though. None.

Drama? By the shedload.

An intense football rivalry? No, the rivalry.

Every tackle, second ball and blade of grass is fought over when these two meet.

As the saying in Portugal goes, " Paços de Ferreira, while Benfica's was against lowly Moreirense, but both sides were rightfully confident that the result they craved in Porto would secure them the title.

These were two clubs littered with talent.

For the league leaders, Nico Gaitan and Eduardo Salvio offered pace and trickery in the final third. In midfield, Enzo Perez and Nemanja Matic provided steel and stability in equal measure, while a formidable centre-back partnership of Luisao and Ezequiel Garay played its part in a defence that had shipped only 17 goals all season. Further forward there was Fernando as the breaker of play, caster of magic João Moutinho and finishers of dinners Jackson Martinez and ​James Rodriguez.

Two teams ready for war, and two sets of supporters with no idea what they were about to witness.

Engulfed in a cacophony of noise, Porto started the match with intent. Danilo embarked on one of his trademark forays forward, with his low cross just evading the onrushing Martinez. Porto were well and truly up for this.

Booed every time they touched the ball, Benfica remained undeterred. Game management ensured they weathered the early storm, finding their feet in the hostile atmosphere and starting to implement their passing football onto proceedings. Their opening goal, however, was avoidable on Porto's part, and swung the pendulum towards the Lisbon club.

Failing to effectively clear from a long throw-in, the ball came sailing into the box in the 19th minute and, after a scramble, fell to Garay. His effort was blocked, but the ball deflected into the path of Lima, who was floating in an onside position to slam home into the empty net. A response was needed, and a response the Porto fans got, no matter how fortuitous.

Silvestre Varela, causing all sorts of trouble down the left-wing, forced the equaliser just six minutes later. Maxi PereiraArtur Moraes flat-footed. The Brazilian scrambled to try and prevent the cross sneaking in at the near-post, but all he could do was help it in on its way.

In what had been a blistering start to the match, in every sense, the accompanying nerves began to rear their heads. So much so, in fact, that shots from distance became the avenue both sides were keen on exploring for the rest of the first half. None of which were any real cause for concern.

But this wasn't a match that was to be decided by whose goalkeeper would outdo the other, which defence was the most solid, or which striker was the most clinical.

This was a match of moments.

An individual display of composure that would turn the tide one way or another. Any one player on that pitch seizing the opportunity presented to them, and grasping it with both hands. Perhaps even from the bench. A naturally cagey affair ensued in the second half, barring a stunning flailing save from

Not until the 80th minute did either side force a keeper into a save of note, as Óscar Cardozo tested Helton in the Porto net with a low curling free-kick. 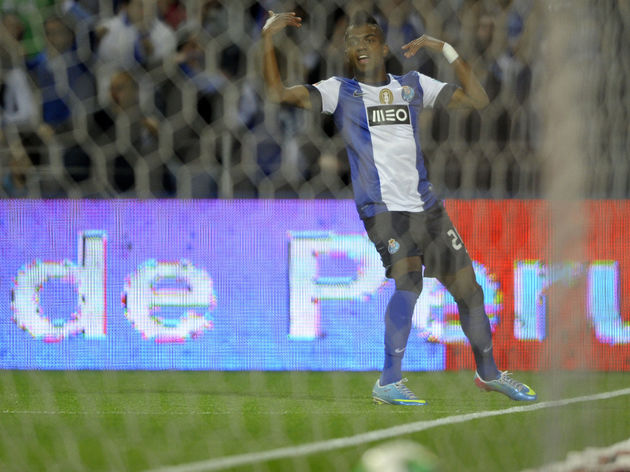 Before it had even had the chance to hit the turf, he struck it. Sweeter than any Pastéis de Nata he'll ever eat, he found that far corner. And, in doing so, he won Porto the league.

Yes, one could argue the league was won on the final day, but one quick glance at the respective managers told you the title was secured with that kick of the ball.

Pereira went full Jose Mourinho in his excitement, while