LOL: The Best Memes & Funnies From the Premier League This Week

​In the era of banter, one single week is enough time to prompt the keyboard warriors of this world to amuse us to great degree with some (sometimes) light-hearted chuckles.

One club in particular has assumed the role of Banter Claus this season, while there were moments of infighting and Ronaldinho-esque skill that left us purring.

Whether your team is struggling for form, or your club are flying in a footballing sense, here are some of the week's best memes and funnies to either lift your mood, or keep it going.

Troopz' Thoughts On The David Ornstein Article https://t.co/6uTUymG1CK via @YouTube

When you fancy something to raise your spirits, say, for instance, if your team lost on the weekend, why not set sail for an online odyssey where you can watch other club's supporters scream loudly down a camera for five minutes?

The biggest fan channel of ​Arsenal has earned a reputation for the way in which some of their regular contributors are accused of being, dare I say, too hard on some of the players. Whether their responses are constructive or not, or indeed whether you find it great that fans can have their say, the Gunners squad are supposedly not too keen on the way captain ​Pierre-Emerick Aubameyang has embarked on a close-knit relationship with the channel.

In particular, 'Troopz' has become a closer-than-usual friend of Aubameyang's, with the Gabon forward issuing a response to the reports he is stepping too far out of the bubble in which footballers are supposedly meant to live in.

Aubameyang responds to criticism of his relationship with #AFTV & Troopz pic.twitter.com/DD2ylWQ3Id

The club is essentially one big walking meme at present. So any opportunity to make light of the situation was duly touched upon by the loving public.

Arsenal board : “Auba you can’t be friends with troopz,he’s spreading a hateful message about your team mates and team,please do stop”

Aubameyang's half time talk when we r losing a game...

"If yall dont fix up, imma tell Troopz to go all in on y'alls asses on AFTV!" pic.twitter.com/7B4vGy3Qqj

Today is 11/11, after all. You simply have to respect the Troopz. https://t.co/ftmCbwwvhS

With stardom already propelling Troopz onto the official FIFA video game, there is unquestionably going to be a mention or two of this week's happenings on his next appearance on the channel.

Troopz defending aubameyang in his next appearance on AFTV pic.twitter.com/O1impnnqYJ

​​However, their friendship must be kept a secret from now on...

Aubameyang and Troopz trying to just hangout without the club knowing pic.twitter.com/7VW85Dv2mW

Emery checking who walks into Aubameyang's box the next game to make sure Troopz isn't there pic.twitter.com/ZiG4XUMoHM We all love Ronaldinho and, anyone who suggests otherwise, look away.

Who can forget the ​magnificent Nike advert that pitted Brazil against Portugal? While wondrous in every way - Ricardo Quaresma having hair and the old school T90 boots, for example - nothing beat

OH MY GOD RASHFORD JUST ENDED SOMEONE. THAT SKILL WAS FILTH

That was a Devilish Skill from Rashford! Career-ending #MUNBHA #MUFC pic.twitter.com/SaJ3Ot5dF9 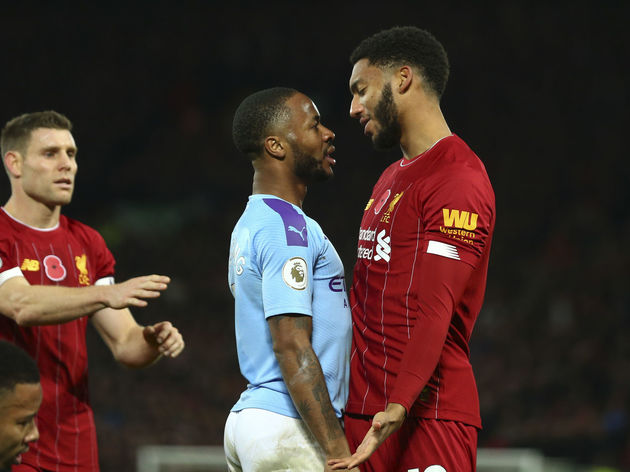 Yes, that's harsh, but ​Raheem Sterling being left out of consideration for the Three Lions' next Euro 2020 qualifier due to his scrap with Joe Gomez will offer Thursday's visitors a glimmer of hope no doubt.

​Basically, the two came to blows during the Manchester City vs Liverpool game. Essentially, it hadn't been forgotten. Ultimately, Sterling ain't playing at Wembley.

Hilarity ensued even after the Anfield clash.

Sterling kicking off with Gomez, TAA and Henderson pic.twitter.com/pklNXryNuh

While it was Sterling who was the most antagonised, there were those who questioned if the match-up was a fair one in the first place.

Joe Gomez minding his business in the canteen and a wild Sterling appears pic.twitter.com/TYTZQMNRe5

How Joe Gomez was tryna explain himself whilst Sterling was choking him out pic.twitter.com/Or3GJYV3Ny

​​Forgotten man Jesse Lingard got a shout out (of sorts) in what was probably an accurate reenactment of the events. After what appeared to be a fine transfer window of business for Manuel Pellegrini's side, ​West Ham have proceeded to be rather rubbish in a season in which they were tipped for European qualification.

wish I was joking.

Roberto has gone to punch a cross away and has knocked it into his own net!

In my life I have seen some extremely bad footballers play for West Ham United football club. I think Roberto Jimenez might just be the worst

As nightmares go, @WestHam’s keeper Roberto is having a rascal.

Team sheet for Spurs comes up on Sky Sports

​​At least their backup goalie hasn't ​made any clangers recently...