​Forget the Portuguese revolution unfolding at Wolves, it's a Spaniard who is causing quite a stir at Molineux these days.

Adama Traoré's latest man of the match display came in his side's 2-1 home victory over Midlands rivals Aston Villa in the Premier League on Sunday.

Adama Traoré completed 10 take-ons against Aston Villa, no player has completed more in a Premier League game this season.

The Wolves winger was a menace to Villa's defence all afternoon and provided an electrifying assist for Raul Jimenez's match-winning strike.

Traore put on the afterburners as he out-sprinted Villa's Douglas Luiz before picking out Jimenez with razor-like precision. And it's

However, it's not just those in the Black Country who have taken heed of Traore's upturn in form. It would appear those on the continent are beginning to sit up and take note.

Only Eden Hazard (13) has had more successful dribbles in a Premier League game since August 2018 than Adama Traore (10) managed against Aston Villa.

Not least is Spanish national team coach Roberto Moreno, who recently called Traore up for Spain's upcoming Euro 2020 qualifiers against Malta and Romania.

The ​Wolves star was drafted in by Moreno as a replacement for Valencia's Rodrigo, who had to withdraw due to injury.

"The truth is I've spoke with Mali, but didn't sign anything," Traore told the Wolverhampton ​Express & Star. So that leaves the door open for Spain, right? Well, only slightly ajar, it would seem.

Despite being granted a place in the squad, Traoré pulled out of Moreno's squad, following Sunday's win over ​Aston Villa.

The official line from Wolves is that Traoré is injured, but it may be a tactical ploy for the wide man to bide more time in making a decision.

With a tug of war ahead, why would Spain pursue Wolves' wing wizard?

He has his doubters...

Traoré has always had bags of potential, his days spent in Barcelona's youth team are proof of that. 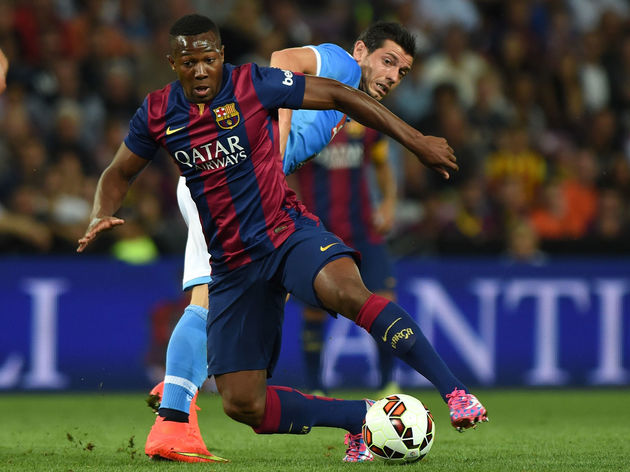 But, since turning professional, there has been a question hanging over his ability to produce in the final third. And that scepticism comes with good reason.

At Aston Villa and Middlesbrough, Traoré scored a total of eight goals in just shy of 100 games, hardly what you would expect from a graduate of La Masia.

In truth, last season wasn't much better. Traoré only scored once on his return to the Midlands but he has started this campaign on fire, and is now starting to win over some of his doubters.

Traoré has already doubled his tally from last season. That in itself would be a good start, but when you consider that the goals came as a brace against champions ​Manchester City in a 2-0 away win, it seems all the more impressive.

At the Etihad, in the last ten minutes, Traoré showed his capability of tearing even the best teams apart and Guardiola's men simply couldn't live with him.

Yes, it may have been just one game, but since then Traoré has kicked on and despite us only being in November, he has already registered eight assists in all competitions for Wolves.

At present, he is proving a striker's dream. So what exactly would Traoré offer La Roja?

Pace and power, that's what.

As Spanish newspaper ​Marca stated, Adama Traoré "is one of the fastest and strongest players in the world". Now, who wouldn't want such an asset in their side?

Spain are definitely crying out for a little more gas from their wide players. You need only look at their international game against Sweden last month to see there was a lack of pace.

It was only on the bench with Jesús Navas where speed was evident, and with Navas turning 34 at the end of this month, his days with the national side are numbered. True, speed isn't essential for a Spanish side who have always been accustomed to building from the back, patiently constructing moves.

The 23-year-old could stretch tiring legs in the closing stages and provide Spain with the option of a fast counter.

Traoré's selection would certainly add something different to the Spain squad and potentially the jet-heeled star could prove to be La Roja's secret weapon. Traoré has the final say.

"I’m happy with the situation, but I think the important thing is that I keep growing and after the international team will come," said Traoré.

“For me, the important thing is that they trust me, the international teams, Mali and Spain.

“I am just focused on trying to grow and give my best.”

So it remains to be seen if the winger will again pull on the Spanish shirt. His pace would be a fantastic asset but it's anyone's guess whether Adama ends up with La Roja.