​It seems that no one is quite sure what's going on with VAR.

The term 'clear and obvious' has been heard in every corner of the country, but it is neither clear nor obvious what referees mean when they say this. How blatant an error do the officials have to make before a decision is overturned? Even they don't know. All the confusion has led to ​the Premier League calling a meeting with all top-flight clubs to discuss potential changes to the current system. If any alterations are made, it will surely be of benefit to everyone, but it won't make up for the bizarre decisions we've already seen in the early months of 2019/20.

Here's a look at the ten most controversial VAR moments since it was introduced to English football. ​Norwich City went down 2-0 away to ​West Ham United in August, yet the Canaries could have come off worse had Sebastien Haller not been denied a penalty as he tumbled over the leg of Tom Trybull.

The ​Premier League's chief of referees Mike Riley subsequently ​admitted VAR had got this one wrong. Thank goodness, it had no baring on the result, or a far greater fuss would have been made.

9. Offside By a Blade of Grass During ​Tottenham Hotspur's 1-1 draw at home to ​Sheffield United this month, the Blades looked to have equalised within minutes of Heung-min Son's opener for the hosts.

However, the new technology spotted that the toe of United midfielder John Lundstram had been offside. ​Aston Villa came undone in the second-half of their clash with ​Manchester City in the north-west, with the match effectively killed off when David Silva grabbed the Sky Blues' second.

The Spaniard wheeled away in celebration as he claimed to have got a touch on a wicked free-kick delivery from Kevin De Bruyne. If he genuinely had, the goal should not have stood, given Raheem Sterling was offside and blocking Tom Heaton's view at that precise moment.

VAR could not prove Silva had made contact, despite the playmaker making it clear and obvious that he thought he had. City got their clincher and Villa were left to curse their luck.

7. The Shoulder/Upper Arm of God Dele Alli's leveller for Spurs in a 1-1 draw with ​Watford looked rather suspicious, with the Englishman appearing to control the ball with his upper arm, before slotting home.

Once again, it took a drawn-out examination to determine whether he had handled it, and once again, the Lilywhites got the benefit of the doubt.

If you were to completely remove Alli's arm from his body and leave only body parts he can legally play the ball with, it's highly unlikely the 23-year-old would have managed to get a shot away. The Hornets were well and truly robbed. Riley also cited this incident as one of the decisions VAR had made a mistake with.

In normal time, it was difficult to see ​Bournemouth's Jefferson Lerma accidentally treading on Silva's boot, but on replays it was impossible to miss.

So, what did the officials decide? No penalty, even though referee Andre Marriner would have done incredibly-well to spot any contact at full-speed.

5. Jesus Does Not Save 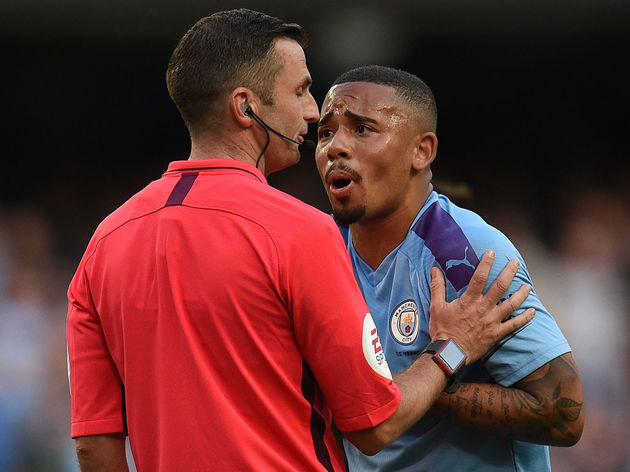 City looked to have overcome Spurs with a stoppage-time rifle from Gabriel Jesus, only for VAR to pick up on a handball by Aymeric Laporte which led to the Brazilian's last-gasp goal.

According to laws introduced this season, the system was right and the Frenchman should have been penalised. However, this opened up Pandora's box as viewers began questioning the fairness of the new ruling.

Two players can accidentally handle the ball in exactly the same manner, yet it may only be considered an offence if it's done by an attacker, not a defender. No wonder fans were up in arms. Youri Tielemans' wild lunge on Bournemouth striker Callum Wilson was not one for the faint-hearted.

It's not an overstatement to say the Cherries hitman was fortunate to avoid a serious ankle injury as the Belgian went studs up into the side of his leg. In an astonishing turn of events, VAR concluded that is wasn't even a foul. Amazingly.

That can only be due to the Premier League's excessive protection of officials and the decisions they've already made. Every member of the ​Liverpool coaching team went berserk following Marcus Rashford's tap-in during the Reds' showdown with ​Manchester United in October.

They had no grievances about the cross that picked the striker out, nor where Rashford had been at the time the ball was played in. No, During ​Everton's 3-2 defeat at ​Brighton, Michael Keane accidentally trod on Aaron Connolly's toes, so VAR went and trod on the Toffees' toes.

The centre-back wasn't even looking when he placed studs on his counterpart's foot, yet he was adjudged to have fouled the Seagulls midfielder. This was another incident that led to loud calls for more clarity within the laws. We witnessed an absurd application of the offside rule as Liverpool came back to beat Villa 2-1 at the start of the month.

How is that even possible? Isn't an armpit just empty space? Simply mind-boggling.