​Manchester City are ready to challenge any rival for the signature of 17-year-old Rennes midfielder Eduardo Camavinga.

Camavinga has been a permanent fixture in the Rennes midfield this season, having started all 12 of their league games so far. He rose to prominence with a dominant performance in a 2-1 win over Paris Saint-Germain earlier in the season, and he has gone from strength to strength since. As a result of his sensational form, plenty of European giants have expressed an interest in signing Camavinga, but 90min has learned that ​City are ready to make a major push for his signature.

There has been interest in Camavinga from across the continent, with the likes of ​Real Madrid, ​Barcelona and ​Bayern Munich all keen on recruiting the Rennes wonderkid.

Even in England, ​Arsenal, ​Chelsea and ​Manchester United have been following the teenager closely, but City are prepared to do battle with them all to try and come out on top. 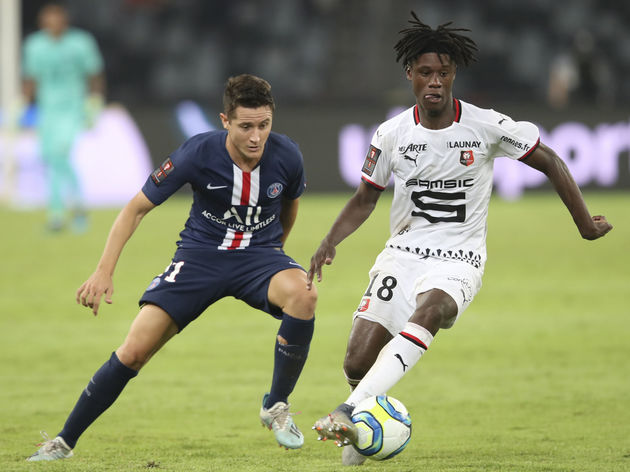 Camavinga only penned a new three-year deal with Rennes during the summer, so the Ligue 1 side will be able to demand a considerable fee for their young star.

However, that would likely not be a problem for City. Pep Guardiola's side are prepared to spend big on their quest for European domination, and they want to assert themselves by winning the race for Camavinga's signature.

Predominantly a defensive midfielder, Camavinga has showcased his ability further up the field on occasions this season. He bagged a phenomenal assist in the victory over PSG, with his impressive vision and passing range on show.

The 16-year-old put on a stunning display against PSG last night, including this utterly sublime assist for the winner!

The Angola-born midfielder was recently granted French citizenship to allow him to represent Les Bleus at international level.

He has since been called up to the France Under-21 squad to replace Arsenal midfielder Mattéo Guendouzi, who was promoted to the senior side.