Liverpool extended their lead at the top of the Premier League to a remarkable eight points on Sunday at Anfield, after goals from Fabinho, Mohamed Salah and Sadio Mané secured a scintillating statement win over title rivals Manchester City.

The visitors dominated the possession and territory early on, but weren't sure what had hit them when a double salvo from Fabinho and ​Mohamed Salah send the Reds into in dreamland.

Fabinho's long-range effort flew past Claudio Bravo, coming immediately after controversy at the other end, when an apparent handball by Trent Alexander-Arnold was waved away by Michael Oliver, and then again by VAR. There was a slight hint of offside in the build up to 's goal too​Liverpool 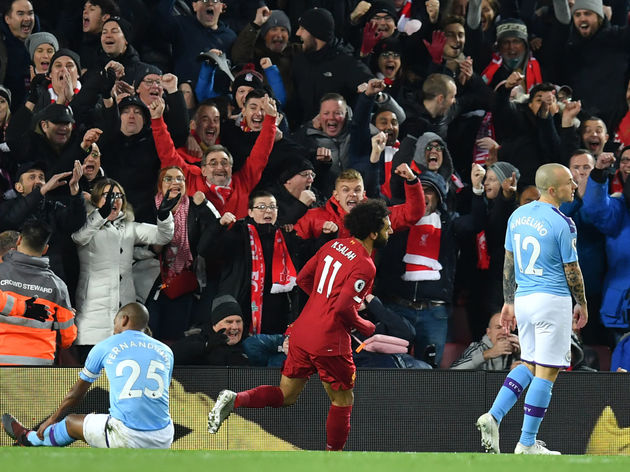 Neither side was looking particularly impressive at the back, and there was no question it was the visitors who had more of the ball in their opponents' half; but it was the home side, in front of a raucous Anfield crowd, who were incisive and clinical when they had to be. For that, they merited their early lead.

It wasn't looking as if things could get better for Liverpool after the break, but astonishingly, there was a third goal within minutes of the restart. Jordan Henderson showed some terrific industry down the right before picking out ​Sadio Mané with a peach of a cross, the Reds' top scorer obliging with a header forced past Bravo.

The third goal looked to have floored ​City, who were second best throughout the second 45, and although they did hint at making a game of it when Bernardo Silva swept in on 77 minutes, there was to be no late revival, as Liverpool drew the first blood of this season's title race.

900 days without a league defeat at Anfield, so much was made of the impact of playing at home for Liverpool in their biggest game of the season so far, and right from the off it was obvious why.

The home faithful were deafening from before the first whistle, working almost as hard as the players on the pitch to create a near-biblical atmosphere, and it worked wonders for their side as they raced into an early two-goal lead. At the other end, they rode their luck defensively, with hints at the fragility that had so far seen them go the entire season without a clean sheet on home turf. But in truth, the Premier League champions struggled to create more than a half-chance for much of the first 45, and the Reds merited their three-goal lead by the time Mané got in on the act.

Make no mistake, the title is a long way from decided; we are still some way from Christmas after all. But there was a real feeling that Liverpool have finally exorcised the one remaining demon that hung over their head; they dispatched their nearest challengers with some aplomb, with a performance that set the rest of the division on notice.

As ever, Liverpool's attacking trident took centre-stage, but what turned out to be a rout from the league leaders was started by Fabinho, whose early screamer showed that he somehow has even more to his game than we previously thought.

Fabinho is the midfielder I’ve desired since Mascherano left, and without even slight exaggeration, he’s surpassed anything I thought plausible.

I cannot believe that from Fabinho. What an absolute screamer. Not only can he defend, he can score absolute worldies.

Best DM in the world.

The only thing Jorginho has that Fabinho doesn’t, is hair.

Fabinho is on another level.

In truth, it's getting difficult to put into words just how much of an impact he's had since establishing himself in the Reds side. Here, he starred at the base of a midfield that took on City at their own game throughout the second half, and emerged as clear and obvious winners.

Impenetrable on the ball and indestructible off it, Fabinho may be the best signing made in a modern era that has yielded Virgil van Dijk and Mohamed Salah.

Their one league win at Anfield since 1981 was played down by Pep Guardiola pre-match, but  it clearly weighed heavy on the minds of the players. They hadn't won here since 2003, and though Guardiola's side kept the ball well and dominated the early territory, their performance showed no signs of breaking that duck.

They desperately needed an elusive Anfield win, or at the very least a point that would deny Liverpool the opportunity to put even more daylight between themselves and the rest of the division. It couldn't have been further from being their day, however. City were uncharacteristically unsure of themselves on the ball in the final third, clearly wary of the threat posed once they lost possession - such is the effect of playing against this Liverpool side.

At the back, meanwhile they were little short of a disaster. A shaky-looking John Stones partnered makeshift centre-half Fernandinho, who spent much of the game covering for left-back Angelino, whose positioning left a lot to be desired. All-in-all, it was a display that did City's status as record-breaking champions no justice, and more pertinently, one that put their chances of retaining in serious jeopardy.

It was a difficult afternoon for City, and one that makes it difficult to single out any individual in their side for praise. Going forward, however, their clearest attacking threat was not carried by Sergio Agúero, nor was it the prolific Raheem Sterling; it was Bernardo Silva, whose head didn't drop as he continued to show for the ball and try and drag his side back into a game - as typified by his late consolation strike.

Liverpool will look to cement their position at the top of the division after the international break with a trip south to London to face Crystal Palace, before Napoli come to town for Champions League duty midweek.

City, meanwhile, have a double-header at the Etihad, with key ties with Chelsea and Shakhtar Donetstk coming in close proximity after the break.