Why Alex Oxlade-Chamberlain Is the Answer to England's Midfield Dilemma

​What an incredible 18 months it's been for English football. Teams from the Premier League have dominated Europe, particularly the Champions League, with Liverpool leading the way by reaching two finals - winning one. Meanwhile, the England national team made the semi-finals of the World Cup (even winning a penalty shootout) and the UEFA Nations League.

But let's spare a thought for a man who should have been at the heart of all of those achievements but had them cruelly ripped away when he picked up a serious injury in April 2018 which forced him to spend almost a year-and-a-half on the sidelines. After years as a bit-part, nearly man, ​Alex Ox​lade-Chamberlain was beginning to really grow into a key figure on the domestic and international scene during the 2017/18 season. Whilst many questioned what type of player he was during a frustratingly mixed spell at ​Arsenal, where he was shunted around and eventually shoehorned into a wing-back role, Jurgen Klopp had fine-tuned the Englishman's best attributes and was reaping the rewards.

The midfielder's progress was stunted by this long-term knee injury, and he quickly became the forgotten man among all of his teammates' successes and the rise of the new ​Premier League golden generation. During his injury there was talk of a need for added midfield creativity at Liverpool. Xherdan Shaqiri was signed and Nabil Fekir, infamously, almost arrived. It seemed that the Reds were moving on.

However, Oxlade-Chamberlain came back with a bang from his fitness nightmares - scoring three times in the Champions League group stages - and quickly convinced England boss Gareth Southgate to include him in the upcoming Three Lions squad with a string of superb performances for the Reds.

With plenty of talk surrounding the lack of balance in the current England midfield, ​Oxlade-Chamberlain's return to the fold couldn't have come at a better time for Southgate - or the Reds star himself.

Following England's transition from a three-man defence at the World Cup 2018 to a more traditional back four, the Three Lions began to reach heights that supporters hadn't seen for some time. A pulsating 3-2 victory over Spain was possibly the pick of the bunch, as England's front three began to click and the defence looked much more settled. One point of interest - or concern - to take from Southgate's Spanish triumph, is the current decline of the midfield three which started that glorious night in Seville.

Harry Winks, ​Ross Barkley and Eric Dier were performing close to the peaks of their powers just over 12 months ago, but their domestic form and playing time has dropped considerably since that Nations League triumph.

Winks is part of a struggling ​Tottenham Hotspur side which is languishing in the bottom half of the Premier League, and Dier can't even get a game for the hapless Spurs. Barkley has only managed 339 minutes for Frank Lampard's ​Chelsea team this season, and compatriot Mason Mount continues to get the nod ahead of the ​ex-Everton man.

However, despite the trio's evident drop-off, few midfielders have stepped forward to stake a claim in Southgate's starting eleven. ​Liverpool's Jordan Henderson is a natural-born leader, and he is likely to be part of England's plans going into Euro 2020, but others such as Declan Rice and James Maddison have failed to convince the boss of their international credentials.

A slight identity crisis for the Three Lions, then. 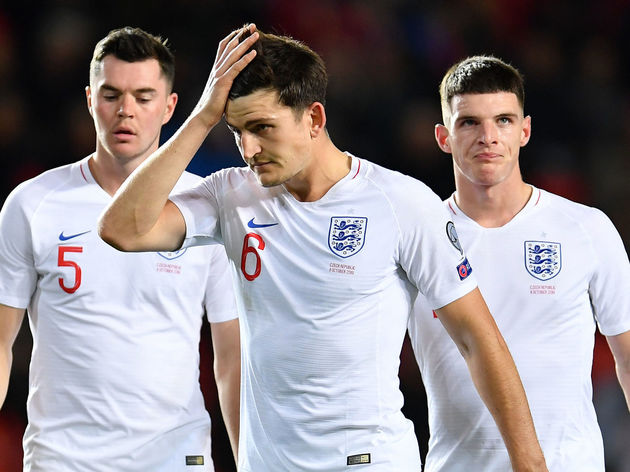 With that in mind, we circle back neatly to the in-form Ox. If Southgate settles on the 4-3-3 system which he has relied upon over the past 12 months, then Oxlade-Chamberlain is the perfect man to end his search for the missing link in the middle.

England's midfield does not lack energy, intensity or sideways passes with ​Henderson and Winks, but directness and drive is certainly missing. Oxlade-Chamberlain is an accomplished dribbler with the ball, and his pace and agility are the key attributes which saw him burst onto the scene as a promising right-winger during his days at ​Southampton.

The Liverpool man possesses a real physical presence in the centre of the pitch too, and his ability to pick up the ball and drive at defences creates plenty of space for those ahead of him, who have benefitted greatly from his return to match-fitness in recent weeks.

And one thing which has been proved of late is that the man can strike a ball very well indeed. Oxlade-Chamberlain has scored four goals this season, all showing a different string to the midfielder's finishing-bow. An audacious strike with the outside of his right boot against Genk earned him the October 'Goal of the Month' award for Liverpool, and he followed it up with a thunderbolt against Arsenal in the Carabao Cup.

The @StanChart Player of the Month for October  pic.twitter.com/tTGOCypjht

So he can run with the ball, chip in with goals and throw his weight around, but can he defend? In a word, yes. Oxlade-Chamberlain is a willing runner who can track back and break up play when needed, and his balance between attack and defence makes him the ideal candidate for Southgate's midfield.

The England system does bear a resemblance to Klopp's Liverpool set-up: a 4-3-3 with an industrious midfield which allows marauding full-backs to support a creative and pacy front three. But the Ox provides an alternative option who can dig in when times are hard, hold possession when the game's pace needs to be slowed down, or drive forward in search of a crucial goal. He's got it all.

The reborn midfielder has an entire season to prove to Southgate that he can maintain his performance levels in a winning squad, and with Liverpool chasing domestic and European success once again, and England in search of a major trophy next summer, Oxlade-Chamberlain's day of redemption may be just around the corner.