England women lost 2-1 to Germany in front of over 77,000 fans at Wembley on Saturday evening.

England were presented with an opportunity to equalise after Beth Mead was brought down by Merle Frohmes in the box following Ellen White's through ball. However, the Germany goalkeeper quickly redeemed herself as she saved Nikita Parris' spot kick.

The Lionesses levelled as the half drew to a close. Keira Walsh picked out White with an exquisite first time ball, and the fit again striker finished fabulously with the outside of her right foot.

Germany grabbed the winner in the 89th minute after a heavy spell of pressure, The Lionesses had been unconvincing since returning from the World Cup. Sloppy defensive errors characterised their August friendlies against Belgium and Norway, they failed to capitalise on their first half dominance against Brazil and they lumbered to victory against Portugal.

England's defensive frailties were once again exposed in Germany's opening goal. The Lionesses faced an overload on the left hand side, Hendrich had far too much time to pick out Popp, and the Wolfsburg striker was not challenged as she headed home. It was a good Germany move, but England made it all too easy for them.

More questions will be raised about England's incompetence from 12 yards after Nikita Parris missed another penalty, having failed to score on two occasions at the World Cup.

England started slowly, were sloppy in possession and invited Germany onto them. However, once they got going, the Lionesses looked dangerous and caused the visitors problems.

England demonstrated the football they are capable of playing, but as has so often been the case, it was in spells. In the end, Germany showed their class and deserved to win. 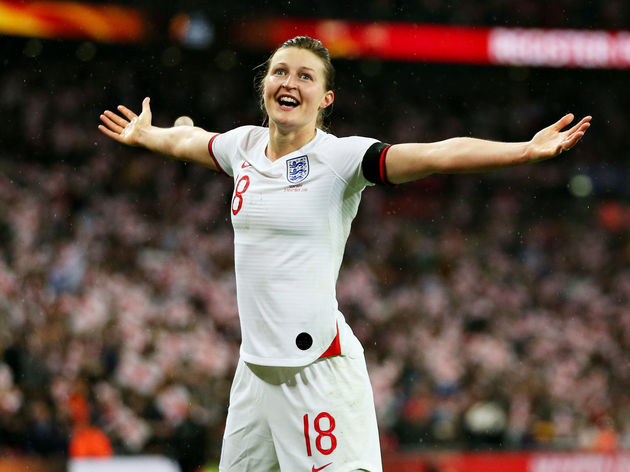 Her pass through to Mead to win the penalty was inch perfect, while her movement and finish for the equaliser was world class. But it was more than just her quality in the final third that White brought. Her work rate and graft up front were essential to England pulling themselves back into the game.

White is renowned for her clinical finishing, but it was her presence up top that England missed most when she was absent for their previous four friendlies. The Manchester City striker offers so much more than just goals.

Ellen White is at it again for England.

She's scored their first ever goal at Wembley in front of a record-breaking crowd. pic.twitter.com/s8OkSfBdn4

And that's all she wrote! ⚽

Germany exited disappointingly early at the World Cup, but have showed no signs of post-tournament blues as they romped to victory in their opening four Euro 2021 qualifiers. They looked similarly impressive on Saturday evening.

Six of Germany's eight goals against Ukraine in their recent qualifier came from wide positions, and once again they really threatened down the flanks. Hendrick exploited England's vulnerabilities on the left for the opening goal, while Dzsenifer Marozsan, ladies and gentleman  she has the vision of the game that no one else has.#ENGGER

​England travel to the Czech Republic on Tuesday, a side ranked 28th in the world. England qualify for Euro 2021 as hosts, so Neville will use this friendly as an opportunity to check out players before announcing his GB squad for the 2020 Olympics.

Germany, meanwhile, continue the qualification process for the 2021 European Championships with games against the Republic of Ireland and Montenegro - who they beat 10-0 in August - over the course of next week.