Bayern Munich humbled a tepid Borussia Dortmund side in Der Klassiker on Saturday evening, as they came out 4-0 victors after a superb display.

Bayern were the dominant force in the first half, and opened the scoring inside the first 20 minutes when - you guessed it - Robert Lewandowski headed home at the near post after a lovely cross from Benjamin Pavard. ​Dortmund failed to get into the game in the first 45 minutes, registering just one shot and having just under 38% possession. Die Roten, on the other hand, were playing some lovely football at times, and Serge Gnabry thought he had doubled their lead before it was ruled out for offside.

Bayern started the second half rapidly and made it 2-0 early on, with ​Gnabry side-footing the ball into a gaping net following some great play from Thomas Muller. Initially, the goal was ruled out for offside, but this time the winger got his goal thanks to VAR.

Lewandowski soon grabbed his second of the game following some more good work by Muller, before former Bayern man Mats Hummels scored into his own net. This was the last major piece of action of Der Klassiker, with Dortmund coming out second best in every department.

Following the sacking of Niko Kovac, it was going to be interesting to see how ​Bayern would bounce back in this massive game. 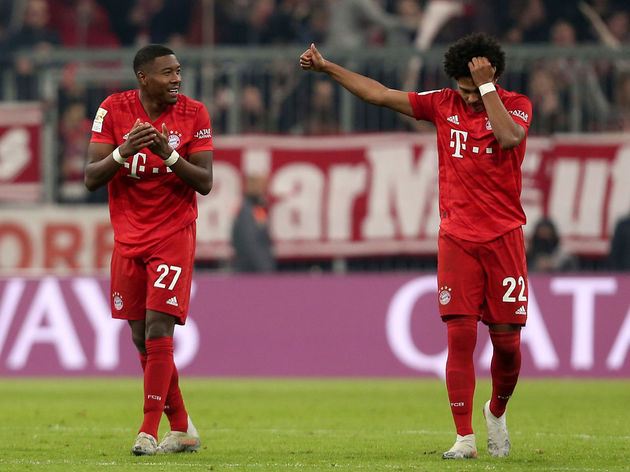 Die Roten were very impressive, and simply didn't allow Dortmund in the game whatsoever. It was a very measured and controlled performance, mixed in with some exciting football. There is a lot of talent in the ranks of the German champions, and whoever takes over permanently will have a lot of good things to work with.

STAR PLAYER - Yes, it's him again. It seems like the big centre forward is getting the star man award every week for Bayern. Lewandowski was magnificent for the German champions, leading the line expertly and holding up play as well as he always does.

Grabbing a brace was fitting of his quality display, and it is looking like he will continue to score goals all season long and break record after record.

Lewandowski is an actual freak of nature. He has literally scored in EVERY game this season. Best ST of the 2010s

Dortmund were coming off the back of two impressive wins against Wolfsburg and Inter, so were carrying a lot of momentum. However, their performance on Saturday evening was utterly disgraceful, and they simply didn't create anything of note to worry Manuel Neuer in goal. They should be up for a game of the magnitude of Der Klassiker, but they were simply not good enough. They have to now put this match behind them and make sure they pick up the three points next week.

STAR PLAYER - Dortmund were nothing short of terrible, and once again failed to turn up at the Allianz Arena. However, if it wasn't for Mats Hummels, the scoreline could have been a lot uglier than it was - despite his late own goal.

Positives: Hummels, Bürki, the result, no stoppage time, death as an inescapable reality

Both teams have very winnable fixtures to come after the international break, as Bayern head to Fortuna next​. Meanwhile, Dortmund will be looking to bounce back in a thrilling Bundesliga title race as they host Paderborn.