​Chelsea picked up their sixth win in a row in the Premier League to secure their place in the top four heading into the international break, thanks to goals from Tammy Abraham and Christian Pulisic against Crystal Palace.

The hosts dominated the opening 25 minutes of the match but struggled to create any real chances at goal, although

Chelsea needed just six second-half minutes to break the deadlock thanks to a stunning pass from Willian which released Abraham inside the penalty area, and the England international made no mistake from close-range to score his tenth goal in the Premier League this season.

Crystal Palace were spurred on and started to create chances, but they couldn't stop Pulisic putting the icing on the cake for the hosts thanks to a late header with his last touch of the match.

The Blues held out for a comfortable win at Stamford Bridge, albeit frustrating at times, to extend their winning run ahead of the international break with a match against Manchester City also on the horizon. 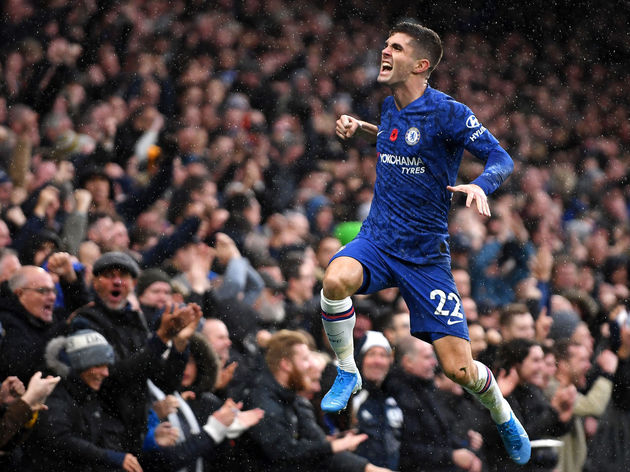 It's been a common thread for Chelsea this season, but Saturday actually saw Frank Lampard name his youngest-ever starting XI in the Premier League so far.

It worked wonders for the Blues throughout the first half as the energy from Chelsea players proved to be too much for the visitors to deal with, but the youngsters struggled to create any clear goalscoring chances. It was the experienced Willian who provided the spark to break the deadlock in the second half, and Chelsea were able to hold on to pick up three vital points ahead of their two-week break.

A sixth win in a row for Chelsea in the Premier League makes them the most in-form team in Europe's top five leagues heading into the international break - second is Hoffenheim, who are on a five-game winning run domestically.

STAR PLAYER - He didn't hit the ground running when he first joined Chelsea, but Christian Pulisic proved his worth on Saturday with another stunning performance under Frank Lampard.

The USMNT international came close to adding to his four-goal haul already this season, and eventually he was able to add his fifth of the campaign when he raced onto the end of Michy Batshuayi's deflected shot.

Have a feeling it could be a long afternoon for Joel Ward up against Christian Pulisic...

Christian Pulisic does a decent impression of Eden Hazard with his quick feet and bustling style. A big hole to fill, but he's giving it a go.

Weaving run from @cpulisic_10 to glide past 2 @CPFC defenders. Just couldn't dink it over @vguaita13. Really cementing his place in this @ChelseaFC team! 

Christian Pulisic is a different player to the first few weeks of the season. It looks like he feels a sense of belonging in the blue shirt. His confidence is clearly sky high. #CFC #CHECRY

“He’s gone out for ice cream and a choc ice.” Punditry at its finest by Glenn Hoddle after Christian Pulisic dummies Joel Ward. Love it. 

Perhaps more impactful, however, was how Pulisic ran rings around Joel Ward and James Tomkins throughout the first half especially, creating goalscoring chances for himself as well as for his teammates - showing a brilliant relationship with Mason Mount specifically.

Coming into this matchday against a team who were enjoying a better run of form than any other side in Europe's top five leagues was always going to be difficult for Crystal Palace, but they set up well in the first half and were able to keep chances down to a minimum. Roy Hodgson's side didn't create nearly enough to pick up points against another one of the Premier League's so-called big six, and the Eagles ultimately deserved to walk away from Stamford Bridge empty-handed.

STAR PLAYER - It wasn't a vintage performance from Crystal Palace by any stretch, and while Wilfried Zaha looked dangerous in attack and

#Cahill with a great block to prevent #Willian from putting #cfc in front before the break. He will be happy how his return to Stamford Bridge has gone so far. #CHECRY

Gary Cahill threw himself on grenade after grenade for Chelsea football club. Watching him throw his body in front of Willian at close range was to see a man experience a human joy that outstrips even that of scoring a goal

To be fair, nice effort by Cahill (of course) to deny WIllian at the end of the half.

Gary Cahill with a stunning block on Willian to save Palace.

Both sides will get two weeks off while international football takes over, but Frank Lampard will be working hard to prepare his side for their trip to Manchester City when Premier League football returns in two weeks.