However, they instead turned in an abject performance as Leverkusen outfought and out-thought Los Rojiblancos. 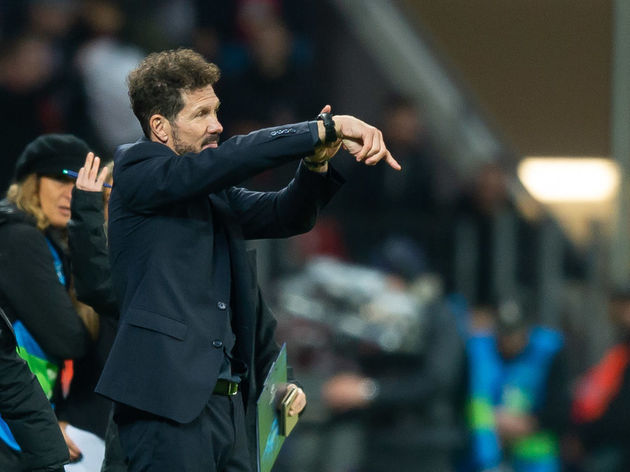 It was a night to forget for Diego Simeone, El Cholo arguably getting his team selection, tactics and substitutions wrong. For many Atleti fans it was the final straw, some going as far as to call for a change in the

The opening ten minutes were ominous, Leverkusen dominating 72% of possession, and that pattern continued throughout the first half. Bus parking, playing awfully and general inflicting viewers to paint-drying levels of boredom were the Twitter criticisms levelled at Simeone.

Atleti would park the bus

Bayer Leverkusen, on the other hand, were playing some nice football, moving the ball too quickly for an off-the-pace Atletico side, with poor finishing their main downfall in a half mostly spent winning corners.

Close. Leverkusen, Pass it one more time and it's for sure a goal. But what a nice move

Very good first fifteen minutes from #Leverkusen, with accurate and high-pace passing on the ground.#LEVATM #ChampionsLeague

​​Atletico seemed determined to gift Leverkusen a goal from one of these set pieces, conceding seven first half corners and defending each one a little worse. Felipe turned one onto his own bar just minutes before Thomas Partey's inexplicable headed own goal, as he sent a cross back towards Jan Oblak's net.

Hell of an own goal by Thomas Partey.

Thomas Partey with an outstanding own goal

Finally one of Leverkusen's corners ends in a goal as Partey puts the ball into his own net.#LEVATM #UCL pic.twitter.com/H2yapJcg7Z

​​A few minutes into the second half and Diego Simeone had seen enough, introducing Thomas Lemar for Renan Lodi. However, with Koke temporarily filling in at left-back there was space for Karim Bellarabi to cross for Kevin Volland and ​Atletico were 2-0 behind.

Saul then took up the left-back role and it was all too much for some fans, some of which genuinely questioning whether it was time for El Cholo to move on.

Atletico have really lost their aura under Simeone as of late, has he lost ideas to get the best out of his team? #B04Atleti

I cant see Diego Simeone staying at the club for too much longer, he seems to have taken them as far as he can.

Simeone with some superb attacking options but always chooses to needlessly be on the defensive.

​​Atleti's performance might have been tepid but the temperatures were sent soaring as the two sides clashed from a corner - one that was poorly defended and would have led to a third Leverkusen goal had Oblak not clawed it off his line.

It resulted in four yellows, two apiece, and the game failed to cool down as Nadiem Amiri subjected Santiago Arias to a two-footed challenge. There was no arguing against his red card and he headed for an early bath.

Dangerous tackle by Amiri, deserved to be sent-off. #B04Atleti

​​Simeone's side rallied late on and Alvaro Morata continued his fine scoring streak in stoppage time to briefly give the away side hope. The Spaniard even had one last chance to grab a (very) undeserved equaliser, but

Alvaro Morata is just on fine form isn’t he? A shame we didn’t win today. Leaving it too late to produce a comeback.

Hard to see this team getting going deep in the tournament this year with that feebleness and impotency on the road.

So, just a second loss across La Liga and the Champions League this season for Ateti, but plenty of fans growing frustrated with Simeone. Spain's top three clubs never fail to entertain, even when their actual performances are boring as hell.