City began the game with a full strength side, despite the fact the visitors have an enormous clash with Liverpool in the Premier League on Sunday. But with qualification only inches away, Pep Guardiola felt it only right to field his best and brightest.

With the previous encounter between the sides seeing City hit five, it was unsurprising that ​Raheem Sterling netted within only six minutes, curling home inside the box following Gabriel Jesus' neat flick. The current Premier League champions soon seized control of the affair, preying on Atalanta mistakes but spurning the opportunities that followed. City were awarded a penalty just before the break when Sterling was pulled back by Rafael Toloi as he raced towards goal, but the foul was deemed to have occurred outside the box by VAR, and ended with a free kick.

The resulting free kick then struck the arm of Josip Ilicic, and the Citizens finally had their spot kick. ​Gabriel Jesus stepped up to the plate, but his pathetic effort went well wide of the Italians' goal, leaving the visitors only one up at half time.

City supporters were left fearing the worst when star keeper Ederson was forced off at half time due to a minor injury, being replaced by Claudio Bravo. Things soon went from bad to worse when Atalanta drew level through Chelsea loanee Mario Pasalic's fine header. The game quickly turned, and the hosts began piling pressure on the City back line.

With ten minutes to go, the drama peaked when half time substitute Bravo was sent off, and with no goalkeeper on the bench, ​Walker was forced to play between the sticks in a remarkable sequence of events.

City went into this difficult European trip knowing victory would see them achieve early qualification to the last 16. In fact, dependent on the outcome of Dinamo Zagreb vs Shakhtar Donetsk, the English side knew they could have the top spot all wrapped up in Group C come the end of the evening.

It looked as if it was going to be a stroll after six minutes, ​Sterling showing his qualities yet again in finishing off a lovely team goal. City looked eager to finish the game off early and put their feet up ahead of Sunday, keeping hold of the ball and playing through Atalanta relatively easily, with half chances coming and going. However, similarly to Liverpool in the Champions League on Tuesday, wasted opportunities proved costly. Atalanta's leveller after the break put Guardiola's side in hot bother, ruing those chances that went begging in the first 45 minutes.

Suddenly, the Italian crowd erupted and City knew they had a game on their hands. Their assurance in possession slowly faded and the hosts began to assert themselves, looking for their first ever ​Champions League points.

Once again, City's defence looked vulnerable, in particular down the right-hand side, and the lack of an out-and-out defensive midfielder made life even more difficult. Atalanta, through the help of the hostile atmosphere created by their supporters, forced their opponents into making poor decisions, giving them little time to breathe. 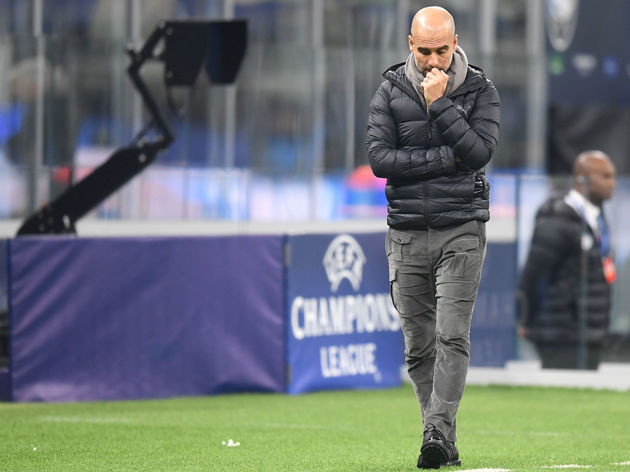 And then a moment of madness. Bravo, having been subbed on for Ederson at half time, saw red after flying off his line to challenge Josip Ilicic. Kyle Walker - yes, the right-back Kyle Walker - had to come on in his place, immediately making a save from the resulting free kick. A ridiculous decision from Bravo, such an experienced keeper on the European stage, almost cost Guardiola's side a point.

An astonishing and baffling end to a feisty affair, in which City will feel grateful to have escaped with a draw despite having taken an early lead. Sterling will be hoping to replicate his display in City's outing at his former stomping ground, Anfield, this weekend.

Sterling is too good at the moment, probs top 5 in form player in the world

Raheem Sterling in 2019 tops any yearly performance from Eden Hazard

City face another trip to a hostile atmosphere this weekend, when they take on ​Liverpool at Anfield this Sunday. The current ​Premier League champions will want to take a step towards defending their crown in their final fixture before the international break.

Meanwhile, Atalanta travel to Claudio Ranieri's Sampdoria this ​Sunday in an attempt to get back to winning ways in ​Serie A.