The visitors took the lead in exceedingly fortuitous fashion just three minutes in, as Guilherme let Cristiano Ronaldo's powerful 30-yard free kick squirm through his body and ricochet towards the net before Aaron Ramsey snuck in to apply the finishing touch.

Aaron Ramsey is the first British player to score for Juventus in the Champions League.

Just ask Cristiano Ronaldo what he thinks about that.  pic.twitter.com/tvZYtE8WUc

I Bianconeri weren't in front for long, however, as Aleksei Miranchuk saw his glancing header come off the post but land perfectly for the forward to tap home the rebound. Chances fell for both sides before the break, with Miranchuk spurning a great opportunity when he headed over the bar, while Guilherme brilliantly saved low to deny Gonzalo Higuain.

In torrential rain ​Juventus found it difficult to find any rhythm against their well-drilled opponents, who continued to pose a threat on the counter attack. Joao Mario nearly put his side in front with 12 minutes remaining but his goal-bound effort was hacked off the line superbly by Leonardo Bonucci.

With the match seemingly set to finish honours even, substitute Douglas Costa poked home in the 93rd minute to break Lokomotiv hearts and secure three valuable points for Juventus.

Having taken an early lead, no matter the manner, few inside inside the stadium expected Juventus not to cement their dominance on proceedings and grab a further foothold in the game.

That didn't transpire and credit must be given to their Russian opponents for the way they fought back from the early setback, carving through the Juventus midfield and testing 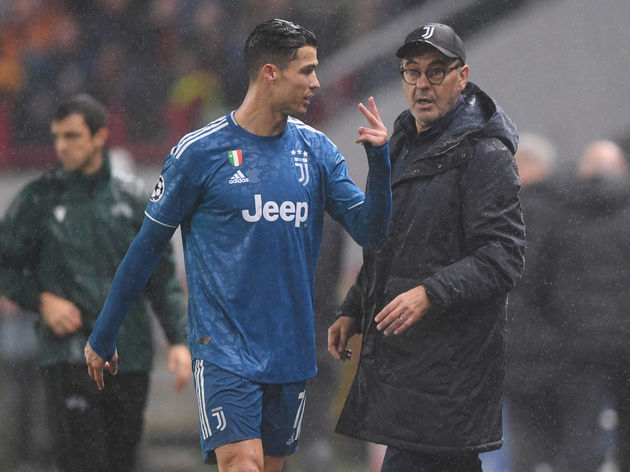 300 - #Juventus are the fifth team to have scored 300 goals in the Champions League and the first Italian side to reach this milestone. Gotha.#LokomotivJuve #UCL pic.twitter.com/ccvzTv2t5b

Ronaldo off and Juventus score?? Ha

STAR PLAYER - It was a mostly underwhelming outing for the majority of Juventus' stars on Wednesday night, with the hosts playing their part in an even encounter. One player who stood out for the Bianconeri, however, was Aaron Ramsey, who was handed a start in the number ten shirt and showed great energy.

Being hauled off was due to Sarri's choice to add width to his side, despite the Welshman's tireless running being a crucial asset to the visitors.

Ramsey been our best player this half

It's back to Serie A duty for Juventus on Sunday evening as they host struggling AC Milan at the Allianz Stadium.