Red Star Belgrade vs Tottenham: 5 Key Facts & Stats to Impress Your Mates Ahead of UCL Clash

It's Been a Long Time Coming ​The last time Red Star hosted Tottenham in a European tie was in the last 16 of the 1974 UEFA Cup, with the hosts coming out 1-0 winners before v

Tottenham subsequently dispatched FC Koln and Lokomotiv Leipzig in later rounds, before losing to Feyenoord in the final.

What this tells you about how Wednesday's game is going to go is...well, nothing. Everyone loves a bit of history though, don't they? ​Spurs fans can't complain about seeing a lack of goals in the Champions League this season, it's just a shame that their own players haven't always been the ones scoring them.

By following up their incredible 7-2 defeat to ​Bayern Munich with a 5-0 win against Red Star, they became only the second team to have experienced a five-goal defeat and a five-goal victory in the competition's group stage in the same season.

Who is the other side who have managed this bizarre feat? Rosenberg, who beat Helsingborg 6-1 and lost to ​Paris Saint-Germain 7-2 during the 2000/01 campaign. ​Spurs skipper ​Harry Kane scored twice against Red Star last time out, meaning he is now only two goals from bringing his Champions League career total up to 20.

Kane's scoring exploits are made even more impressive by the fact that he has only made 22 appearances in the competition.

If the striker can reach the milestone within the next three games, he will overtake Alessandro Del Piero as the fastest ever player to register 20 goals in the Champions League. Quicker than ​Ronaldo. Quicker than ​Messi. Woah. 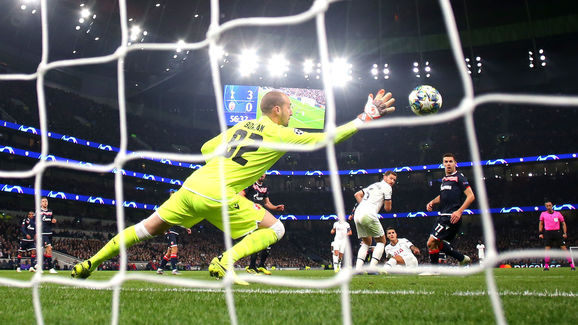 ​Good news for Kane as he looks to break that record - Red Star can't defend for toffee.

Vladan Milojević's leaky defence have conceded 64 attempts on goal in their opening three games, however they have often given as good as they have got - having 40 shots of their own.

This means you should expect a bonanza of pot-shots on Wednesday night. The diminutive, creative midfielder has been in fine form in the competition so far, creating 13 opportunities.

That was more than anyone else at the start of play on Matchday four - except ​Toni Kroos, with whom he is tied for top spot.