​Tottenham reaching the Champions League final was a seminal moment in the club's history, even if they didn't end up winning the whole thing.

The almost script-written journey there, culminating with that Lucas Moura hat-trick in Amsterdam, created lifelong memories for long-suffering fans. Every last ounce of energy was used by a depleted Spurs squad to reach the final and now they are facing the physical and mental consequences. Mauricio Pochettino's side look totally unrecognisable to the iterations of seasons prior, lacking their idiosyncratic pressing, lacking the mental steel that saw them reach Madrid at the end of last season.

Fortunately for Spurs, they aren't alone in suffering from this kind of footballing hangover. Plenty of clubs before them have suffered from reaching the grandest stage of all and plenty of clubs will after them.

Let's take a look back through the history books and look at which clubs just couldn't live with the sky-high expectations they set themselves for one reason or another. Where better to start this list than with the first winners of the UEFA Champions League in its current guise?

Days before the 1993 final against Milan, Marseille were hit with allegations of match-fixing in a league game against Valenciennes, which were later proved that club president Bernard Tapie bribed some of the opposition players to take it easy on Les Olympiens, allowing them to wrap up the title early and focus their energy on the Champions League.

While they beat Milan 1-0 courtesy of a goal from Basile Boli (pictured above in more recent times), the decision about their punishment was still looming over them. Ultimately, they were stripped of their league crown and relegated to the second division at the conclusion of the 1993/94 season, with arch-rivals Paris Saint-Germain winning the title.

Still, their Champions League triumph was deemed fair, and they remain the only French side to have won the competition. Louis van Gaal's total-footballing Ajax outfit were one of the great sides of the 1990s, shocking the world when they beat Milan in the 1995 ​final.

They very nearly retained that title in 1996, but fell to Juventus on penalties, and the Dutch side came out of that encounter stumbling all over the shop (or in this case, the Eredivisie).

Ajax's 1996/97 season was one of their worst by their own lofty standards, finishing fourth with a pretty average points return of 61, 16 fewer than champions PSV.

The Dutch dream team were split up, taking their talents to the rest of Europe, while Van Gaal left for ​Barcelona. Winning the 1997 Champions League was possibly ​Borussia Dortmund's greatest feat, overcoming holders ​Juventus to triumph in Munich. Winning football's biggest club prize at the home of your rivals? Come on, that's as sweet as it will get.

However, that sweet feeling turned sour once summer ended, with Dortmund dropping to 10th in the Bundesliga table, just five points off the drop. Yikes.

They came 25 points behind the winners, newly promoted Kaiserslautern, so for people too young to remember, Dortmund were essentially ​Chelsea when ​Leicester won the ​Premier League. In the late 1990s alone, Juventus managed to reach three successive Champions League finals, but won only once. After the last ​of these runs, the Old Lady collapsed after a long and iconic decade of football.

Talisman Alessandro Del Piero suffered a season-ending knee injury early in the season, and Juve found that it was bloody hard to win without him (as would be the case for the next ten or so years). 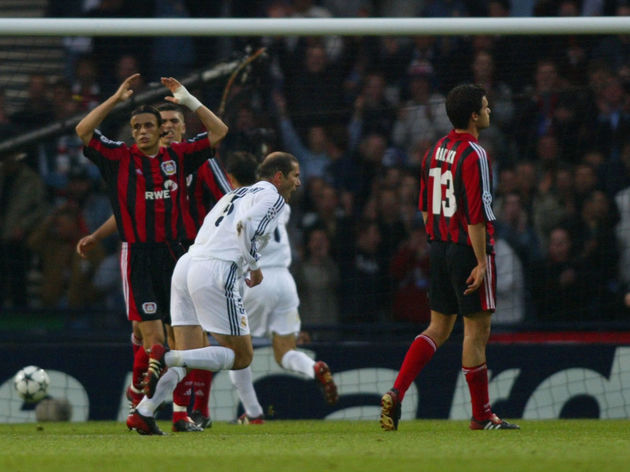 Ah man, the story of Bayer Neverkusen is one as painful as it is hilarious. At the end of the 2001/02 season, Die Werkself finished as runners up in the Bundesliga, the German Cup, and the Champions League. How cruel this sport is.

Beaten at Hampden Park by that Zinedine Zidane volley, Leverkusen hearts were as broken​ as they could be for a side at the top level, and boy did it tell.

After losing Michael Ballack to Bayern Munich they finished 15th out of 18th in the ​Bundesliga, four points above the drop and 35 off the top. Meanwhile, Ballack was parading with the league title around Bavaria. Tough. This one's a bit of a cheat, since the Milan as a team responded pretty well to being on the receiving end of one of the greatest comebacks of all time.

Succumbing to ​Liverpool in Istanbul clearly hurt everyone at the club, so much so that those in higher power brought the club into disrepute over match fixing the season after.

For their role in Calciopoli, Milan were deducted 30 points, meaning that when Juventus were stripped of the title, they missed out on claiming it, eventually trickling down to city rivals ​Inter. Yep, that wonderfully eccentric Dutch coach was once again at the helm when a club avalanched down from the top of the world to the depths of *checks notes* anywhere outside the top two in the league table.

Bayern's run to the 2010 Champions League final saw them paired against Jose Mourinho's run with Inter, with the street-wise Italians winning 2-0 on the night.

Come April 2011, Van Gaal was sacked after a measly title defence, eventually finishing third, while in the Champions League, they fell in the round of 16...to Inter. Listen, if you win three European Cups in a row - for the second time in your history - you're well overdue a banter era season. And so we come to where our story began.

The old adages o​f '​Spursy' have returned for the first time in nearly half a decade, which is both a testament to the job Pochettino has done and also to the job he is currently doing.

We're not even halfway through the season, however, and it would be very 'Spursy' if their league form curtailing coincided with them winning their first trophy in generations.