England has risen to prominence as a star of the Women’s Super League and is one of the newest additions to the Lionesses after making her international debut in the aftermath of the World Cup. With women’s football booming, the 25-year-old is coming to terms with what it means to be a top footballer and everything that comes with it. That means wearing the latest boots from adidas.

“I don’t think the novelty will ever wear off,” England told 90min’s Ben Haines.

“As a sportsperson you want to be in the new best thing that’s out there. So, obviously, to be part of a brand that’s bringing out such extravagant but also awesome boots and building on the idea of different Predators, wearing that boot, is amazing.”

Despite missing the cut for the World Cup squad last season, England has made waves at club level. She finally made her international bow in August and shortly afterwards scored a stunning winner for Chelsea in front of nearly 25,000 fans at Stamford Bridge.

Now, England is set one for another of the biggest games in her career. It may only be a friendly, but all tickets for the Wembley clash between the Lionesses and Germany have been sold. It is expected to mean a new record attendance for a women’s football match on English soil.

“Any player not looking at that game would be silly because who would not want to play again at Wembley? It gives us an insight into how big women’s football is getting and where it can be,” England said, with three caps and one goal already under her belt.

“The men walk out every game and there’s barely an empty seat in there. For us, I think that’s the aim and I’d love to play there,” she added.

“The only time I’ve played at Wembley was the FA Cup final with Chelsea in 2016 and we lost to Arsenal. I’d like to think I’ll get the chance to go back there and get a good result. It was a decent sized crowd, but it wasn’t as big as what it will be [against Germany]. “It’s an unbelievable pitch and anyone that says the occasion doesn’t get to you a bit would be lying, because the minute you walk out of that tunnel and you see the stature of the stadium…even the calmest of players, I’m sure it will hit them a little bit.”

England didn’t get the nod in time to go to the World Cup in France, where her current colleagues finished fourth. But the Olympics are an equally important elite global competition in the women’s game and the 2020 tournament in Tokyo is now only just around the corner

But Olympic squads are smaller than those for the World Cup or the European Championship, with only 20 players selected. On top of that, competition for England is even tougher because of the addition of players from other British nations into the talent pool.

“I’ve said it from day dot, just take it as it comes. All I can do is keep performing, keep scoring, and giving Phil [Neville] a headache because he’s the one that has to pick the team,” England reflected.

“I had a good season when I was at Liverpool [in 2017/18], came back to Chelsea and had an even better season. So, I’m hoping this year I kick on again and have an even better one because I’d be lying if I said I didn’t want to be in contention for the Olympics.” 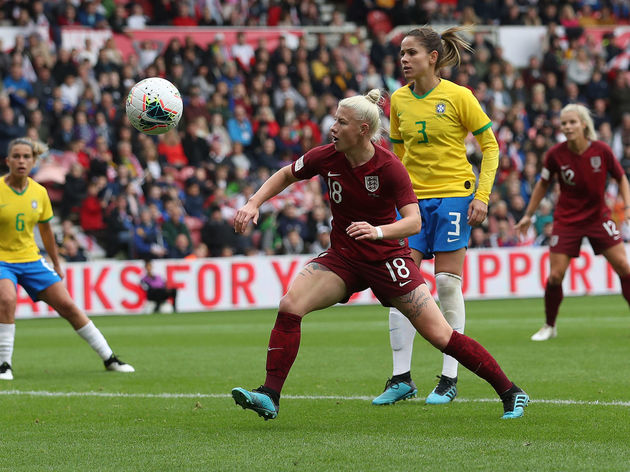 For England, the Olympics also carries an even greater personal meaning because she grew up watching every four years and counts athletics as part of her sporting background, participating in multi-eventing, triple jump and hurdles in her younger days.

“As a kid I grew up doing athletics and football,” she said. “My family was quite athletic as well, so to have that opportunity to go to an Olympics would be a dream come true, just as much as would have been if I had managed to go to the World Cup.”