SSC Napoli 2-4 Lazio is part of 90min's 20 Greatest Matches of the Decade series. Follow the rest of the series over the course of the next few weeks.​

The Champions League. It's the competition that every club wants to enter, whether you stand the slimmest chance of winning it or not. Those Tuesday and Wednesday nights under the lights, the unmistakable anthem blaring around the stadium, going toe-to-toe with Europe's elite.

And it means you avoid the dreaded Europa League - at least until after Christmas, anyway.

Only in knockout competition does a whole campaign usually come down to the final fixture, but the 2014/15 Serie A season threw up one of these rare occasions, where the previous 37 games faded into the background ahead of the final royal rumble.

Lazio and Napoli were in a fight to the death to secure Champions League football for the 2015/16 campaign, but nerves were well and truly setting in around Italy. Roma had confirmed their place in Europe's most prestigious competition, beating rivals Lazio in a dramatic Rome derby on matchday 37, which piled the pressure on their neighbours to seal their European spot in the final game of the season. Their opponents? None other than fellow European hopefuls ​Napoli. The pair sat third and fourth in the table, with only the top three earning Champions League football in Serie A at that time.

I Partenopei, managed by Rafa Benitez, were three points behind shootoutvictoryfront of the home crowd to leapfrog their Roman opposition.

​The stage is set. The warriors are ready for battle. Let the chaos begin!

The noise around the stadium was deafening, as the Napoli fans had come out in typical force to support their heroes one final time for the season.

The hosts started off on the front foot, buoyed by the raucous noise bouncing around the ground. Just before the half-hour mark, José Callejon was played clean through on goal in acres of space, with only a stranded goalkeeper to beat. The Spaniard tapped the ball beyond Federico Marchetti, and it trickled towards the goal. The stadium fell silent with anticipation, and then rather than an eruption, a disbelieving groan filled the air. Callejon's shot narrowly missed the far post and limped wide of the goal. A huge chance.

Napoli's leniency hit Lazio like a bucket of iced water in the face, and Stefano Pioli's men sprang into action. In the 33rd minute, a lightning bolt from the blue struck through Napoli hearts, and sucked the life out of the previously rocking San Paolo.

The ball was knocked back to Marco Parolo who, all of 30 yards from goal, struck a vicious shot which dipped, swerved and rocketed all at once beyond the Napoli goalkeeper.

As half-time approached, Napoli were dominating possession but seemed unable to find a way through an organised Lazio defence. Despite another 45 minutes remaining on the clock, desperation began to set in, as I Partenopei tried to force the issue with seconds left. No silly passes, no errors, boys.

A silly pass from Kalidou Koulibaly gifted possession to a waiting Senad Lulic just inside his own half, and with one cutting pass, Antonio Candreva was released in on goal with just the keeper to beat. "Candreva tutto solo, Candreva tutto solo...rete!" screamed the commentator, as the Italian winger calmly slotted the ball beyond 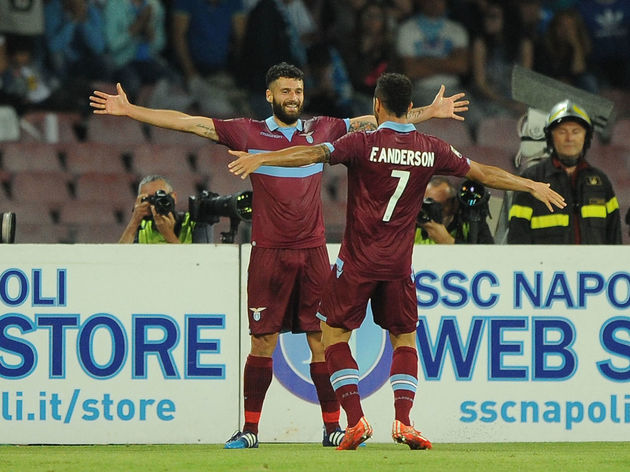 scoreboardterritory. Marek Hamsik's incisive pass found Callejon, who rolled the ball across the six-yard box. Who was there to tap home? You guessed it. Gonzalo.

Behind by only one goal and with 35 minutes to play, the public lifted both their spirits and the noise levels back to their deafening highest. With the momentum shifting, the pendulum appeared to swing in Napoli's favour for a second time when Parolo saw red for a second bookable offence. Lazio were on the ropes.

Then - pure ecstasy. Only two minutes after the red card, El Pipita was at it again. ​Dries Mertens found space down the left-hand side, beat his man and picked out the deadly Argentine striker in the penalty area. Higuain took a touch, sold a lovely dummy to his marker, shifted the ball onto his right foot and rifled it beyond Marchetti to send the home fans into absolute delirium. From two goals down at half time to tied at 2-2 with just under half an hour to play – and a man advantage to boot. Lazio were facing the count on the canvas, and Napoli were already parading the ring, arms aloft, sensing victory was inevitable.

The hosts' elation soon turned to apprehension however, when Faouzi Ghoulam was shown a second yellow card for a dangerous tackle. Suddenly, the finish line looked a little bit further in the distance.

20 minutes to play, ten against ten, and the hosts needing only one more goal to almost certainly gain Champions League football. For Lazio, it was time to dig in.

Five minutes later during this breathless second half, the moment arrived. Napoli full-back Christian Maggio bursts beyond Lulic and into the opposition's box, and the Italian defender hit the floor.

Higuain, on a hat-trick, stepped away from the ball to line up the (full) pressured spot-kick. The San Paolo waited with bated breath. OVER THE BAR. Higuain hit his strike cleanly, but blasted it miles over the crossbar to the absolute dismay of the entire stadium, apart from the small section of Lazio supporters who could breathe again. A let-off. But plenty of time for anything to happen.

The seconds ticked by, and Napoli continued to push for the decisive goal.

With five minutes to go, football produced one of its most dramatic and chaotic moments, which will live long in the history of Serie A. I Partenopei lost possession, and Lazio suddenly swarmed forward in numbers. Maggio, a hero at one end, put in an excellent sliding challenge to break up the counter-attack, but his tackle only served to bamboozle his teammates. The ball rolled into the box, where substitute the

Manager, players and supporters alike were left distraught, unable to comprehend their fate. The final minutes were played out with Napoli unable to conjure up any form of a response, and Miroslav Klose rubbed salt into the wounds with a free header in the second minute of injury time to wrap up the game. The final whistle blew and Napoli's fate was confirmed. A 4-2 defeat. The Champions League awaited the lion-hearted Lazio, while Europa League was the consolation prize for the inconsolable Partenopei.

One of Serie A's most dramatic seasons was saluted by arguably the most pulsating of finales, as the Italian league began to reclaim its place as one of the most exciting leagues in Europe.