A European quarter-final second leg where everything is still all to play for is what most fans can only dream of, but even before a ball was kicked on April 14 in 2016, Liverpool and Borussia Dortmund fans knew they might be in for something special under the lights at Anfield.

Mats Hummels' second-half equaliser in the first leg - Divock Origi had given Liverpool the lead - left both sides with a chance of reaching the Europa League semi-finals.

Jürgen Klopp had brought Roberto Firmino back into the starting lineup after the Brazilian only made a cameo appearance during their first return to the Westfalenstadion since leaving Germany, while captain Jordan Henderson dropped out of the starting lineup. For Klopp's replacement at Borussia Dortmund, Thomas Tuchel - who, like Klopp, also came through at Mainz before taking over Die Schwarzgelben - brought Shinji Kagawa and Sokratis Now the Gabon international didn't quite have the goalscoring reputation that follows him now back during the 2015/16 season, but as Simon Mignolet rushed out to close the distance between him and Aubameyang, he was staring into the eyes of a striker who had already scored 34 goals across all competitions.

It was no surprise to see Aubameyang pick out the top corner from close range, providing a goal which gave ​Borussia Dortmund a two-goal advantage and the upper hand if the second leg ended up being decided on away goals.

The visitors didn't slow down there either, and Borussia Dortmund could have added a third had it not been for Mignolet's outstretched hand diverting a Lukasz Piszczek cross away from Aubameyang and Liverpool's open net. 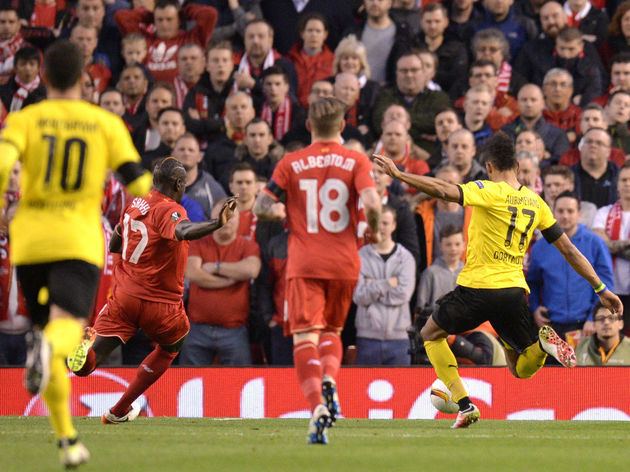 Dortmund couldn't add a third before half-time, something which could have killed off the contest, and Tuchel's side were made to pay just moments after the restart when ​Origi found a way past Roman Weidenfeller to score in front of the Kop.

The goal itself didn't mean too much. Liverpool still had a mountain to climb and knew that any more goals going in at the other end of the pitch would all-but end their hopes of adding another European trophy to their collection.

But what Origi's strike did do was light a spark among the home fans which saw Liverpool's 12th man steal the show, becoming the catalyst for one of the most famous nights under the lights at Anfield.

Liverpool's comeback wasn't immediate, however, as Borussia Dortmund were able to hit back through Reus. 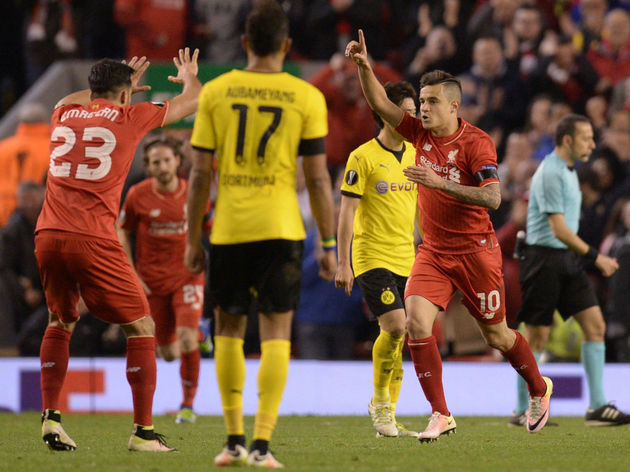 Julian Weigl at the near post and was heading straight towards an unmarked Sakho on the edge of the six-yard area.

The Frenchman used the power on Coutinho's corner to guide the header into the back of the net, scoring one of the easiest goals of his career, as well as one of the most important.

Liverpool's next chance didn't come until added time. The first of four extra minutes that the fourth official held up just a few seconds earlier.

Daniel Sturridge and James Milner found themselves in space on the right corner of the pitch, looking to exploit a Marcel Schmelzer sized gap where the German left-back was caught out of position for seemingly the first time at Anfield. Milner's cross wasn't what fans would consider a perfect pass. His head was down, looking solely at if he could get his foot wrapped around the ball before it crossed over the line for a goal-kick, but he was able to lift it to the far post.

Anfield took a collective breath as the ball appeared to stay airborne for an eternity.

Sakho and Origi were waiting at the back post, but it was clear quite quickly that the ball would drop perfectly in between both Liverpool players.

That was until Dejan Lovren leapt above Dortmund's Adrián Ramos, who'd set himself to clear the ball, and squeezed the ball into the only area that