It is something that Liverpool have never quite been able to do in the Premier League era, until now, which is why the club has been waiting for a first title since last finishing top of the old First Division way back in 1990.

Liverpool have opened up a six-point lead over Manchester City precisely because they have kept winning, even in games that might otherwise have finished in draws or defeats.

Liverpool have claimed more points (10) from losing positions in the Premier League this season than any other club. Most of those turnaround points have come in the last few games alone, while the Reds have also made a habit of scoring late goals to secure points.

In fact, three of Liverpool’s last four games have seen them score in the last 10 minutes and/or stoppage time, yielding five additional points than they would otherwise have had without those late strikes. Those results are therefore now responsible for almost their entire lead over City. 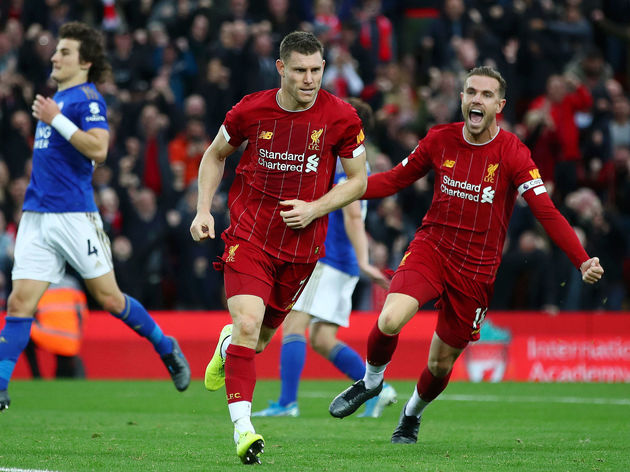 A week after being made to work hard to beat Sheffield United at Bramall Lane – Georginio Wijnaldum got the only goal of that game after 70 minutes – Liverpool didn’t get their winner against Leicester on 5 October until deep into stoppage time.

After James Maddison had equalised for Leicester at Anfield, it was James Milner who converted the 95th winner from the penalty spot to seal the three points. Liverpool were heavy favourites to thrash a floundering Manchester United at Old Trafford in the first game after the October international break, only to struggle to find their usual rhythm against an unexpectedly resilient opponent.

Liverpool trailed for much of the game after Marcus Rashford’s first half opener. A Sadio Mane goal had already been chalked off for a handball and it was arguably one of the team’s weakest attacks that resulted in Adam Lallana tapping in a close-range equaliser 85 minutes in. Liverpool looked on course for a first Premier League defeat of 2019/20 at Villa Park in their last outing. The hosts were leading 1-0 and only four minutes plus stoppage time remained.

But Andrew Robertson found the elusive equaliser and then it was Mane who popped up to get the 94th-minute winner. Manchester City had themselves come from behind to win the same day and the lead could have been cut had Mane not been there to score.