​It was one step forward and another two back on Saturday, as Manchester United failed to follow up their away Carabao Cup victory over Chelsea at Bournemouth's Vitality Stadium - slumping to a 1-0 defeat against the Cherries while continuing their woeful away form in the Premier League.

Marooned in mid-table following their latest Premier League slip-up, the Red Devils currently sit tenth and seven points adrift of the Champions League places - it could be ten by Sunday evening.

Defensive frailties and poor away form have plagued the Ole Gunnar Solskjaer era, laid bare by the latest deflating statistic to emerge from the Bournemouth defeat. 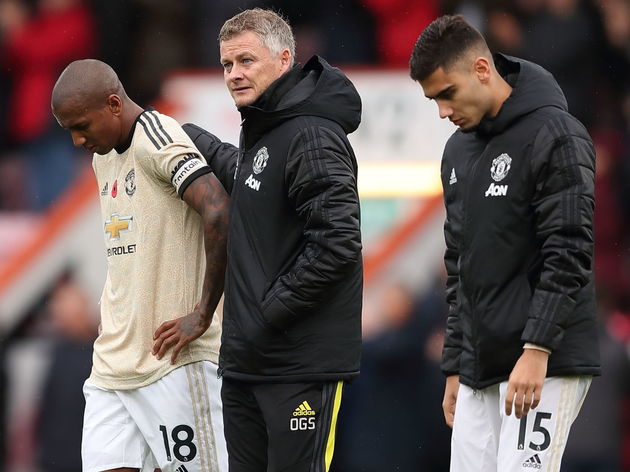 ​Manchester United have now equalled their longest run without a Premier League clean sheet away from home, conceding in 11 successive fixtures on the road.

In the 2019/20 season, this translates to a solitary away win over Norwich (3-1), defeats to West Ham, Newcastle and Bournemouth, and draws at Southampton and Wolverhampton Wanderers.

With a visit to the impressive ​Sheffield United on their next Premier League away day, you wouldn't bet against Solskjaer's side surpassing the previous record - stretching from

Manchester United have failed to keep a clean sheet in each of their last 11 away Premier League games; equalling their club-record.

Solskjaer has masterminded impressive away victories in other competitions but when his team fall behind in the Premier League, the Norwegian has no answer. The Red Devils have lost all six away fixtures in which they've conceded first under Solskjaer, a damning verdict for his in-game management.

He needs to find a tonic for United's poor away form and pretty quickly too. After their Blades encounter, Solskjaer's next away challenge is a trip to the Etihad for the Manchester derby where defending as poor as recent weeks would surely be severely punished.

Their opening two 2020 road trips see them head to Arsenal and ​Liverpool but if Ole struggles to stop the defensive rot, there's no guarantee he'll be at the wheel for either.