Brighton had won their previous two home games in the league, whilst ​Norwich had lost more Premier League games than any other side this season, including winless Watford.

Marco Stiepermann hit the crossbar from 20 yards out in a lively start to proceedings, and Brighton’s Steven Alzate forced Tim Krul into a great save with his foot. Another contentious first-half talking point was the VAR's decision not to send off Neal Maupay for a late challenge on Max Aarons following a goalmouth scramble in Norwich's box.

Despite having 15 shots, it took Brighton until the 68th minute to make an impact, with substitute Trossard firing the Seagulls in front with a near post finish from Martin Montoya’s cross. Duffy added a second in the 84th minute with a fine header from a free kick.

After a compelling first-half performance, Brighton needed to take advantage of the pressure they were creating against one of the league's worst defences. The moment came when Trossard was introduced in the 59th minute, finishing neatly to put the Seagulls ahead just before the 70th minute.

That was sexy as hell from Trossard

The game was crying out for the 24-year-old, and the forward delivered when called upon to earn him consideration for a starting spot sooner or later.

Brighton's star player was Trossard; the Belgian giving the Seagulls the energy and quality on the final ball which they had lacked throughout the first half, and the winger will be delighted to get on the scoresheet.

If Trossard is still a Brighton player come next season, I’ll be amazed. One of the most talented players in the league and you can easily see why he’s being compared as the “next hazard”. #BHAFC

That is Trossard's second goal of the season and could not have come at a better time, with the 24-year-old hoping to cement his place in the starting XI after being hampered by injury in recent weeks.

Teemu Pukki, what’s going on? The 29-year-old started the season on fire for Norwich, scoring six and assisting two in his opening five fixtures. However, the Finn’s drop in form has coincided with Norwich’s decline, failing to muster a single goal involvement in his last five Premier League appearances.

Anyone else think that the norwich players dont seem to have a clue what they are doing.
Tactically all over the place. No support going forward. Pukki is making more runs backwards than forwards.
Full back seem to be afraid of going past the half way line.

Norwich will have to try and involve their talisman more often if they are to get the best out of him. A tough day at the office for Daniel Farke's men, who will need to drastically step up their game with a tough run of fixtures on the horizon. 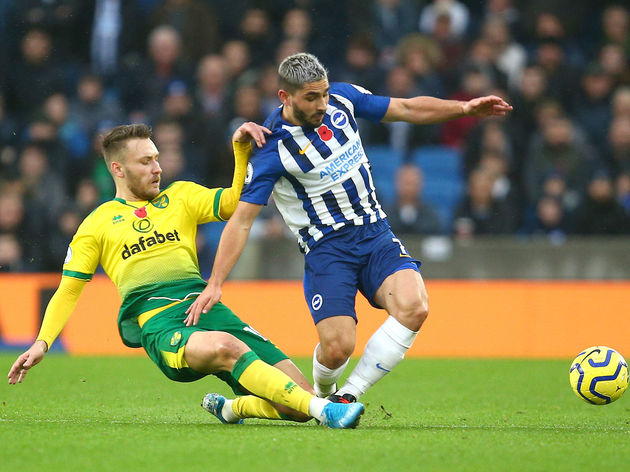 After a shocking display from Farke's men, there was not much to choose from in terms of outstanding performers. Tom Trybull put in a good shift, whilst full-backs Aarons and Lewis also played well despite their team's poor performance.

Thought Trybull did well, Aarons and Lewis too, Pukki did well with what little service he had. Attacking side of the team behind him completely collapsed. Big worry. #ncfc

The midfielder made some key interceptions and was unlucky to see a shot deflected wide in the 73rd minute. Overall a huge improvement is needed from Norwich, and they may look to dip into the market in the January transfer window.

Following this result, Brighton head to Old Trafford to take on ​Manchester United, who fell to defeat against Bournemouth on Saturday, before hosting ​Leicester City on the 23rd November.