Newcastle earned their first league away win since August on Saturday afternoon, as they beat West Ham 3-2 at the London Stadium.

Newcastle took the lead inside 16 minutes thanks to Ciaran Clark's header, Joelinton putting the ball back into the middle after Jonjo Shelvey's free kick went too wide.

West Ham continued to defend poorly, and it cost them almost immediately; Newcastle doubling their advantage just four minutes later when Jetro Willems floated the ball into the box for Federico Fernandez to head home.

The Hammers thought they had pulled one back on the verge of half time, but Martin Dubravka pulled off a stunning save from Fabian Balbuena's effort. Newcastle were denied a third just after the break, as DeAndre Yedlin was offside as he bundled the ball home.

It didn't matter in the end, as Shelvey made it three with a superb free kick. He curled his effort around the wall and found the back of the net in style, as the Magpies got the goal they needed to really put the game beyond their hosts.

West Ham pulled one back thanks to Balbuena, as he bundled the ball past Dubravka to give the Hammers a glimmer of hope. Robert Snodgrass' excellent strike late on gave the Hammers a late surge of impetus, but it was Steve Bruce's side who earned a massive three points in east London. 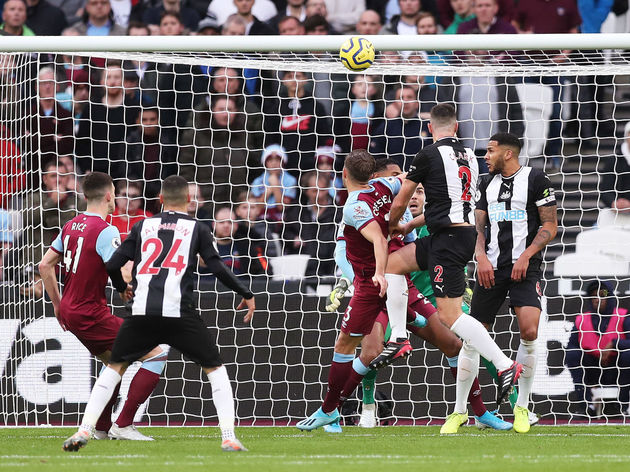 ​West Ham began the game in the worse way possible, as some shambolic defending saw them ship two goals in six minutes. There was no shape, no organisation and no awareness of where the attackers were, as basic defensive errors gave the Hammers a mountain to climb early on.

They weren't impressive going forward, and for a side looking to get back into the game they didn't seem to have that confidence to really threat their visitors. Their defensive mishaps continued to cost them when Newcastle scored a third, and by the time Balbuena and Snodgrass scored late on it was too little too late.

It was a concerning performance from Manuel Pellegrini's side, who weren't convincing in attack for the large part of the game and produced a defensive horror show. They're now five games without a win, as their struggles continued with a lacklustre performance at London Stadium.

STAR MAN - The only positive note to take from West Ham's performance was the impact of Manuel Lanzini, who came off the bench at half time. The Argentine gave the Hammers an injection of pace and life, and helped produce an improved second half display in attack.

Lanzini been lively since coming on ​Newcastle's recent form means they travelled to London one point off the relegation zone, and desperate for a win. The Magpies started on the right foot and went ahead early on, with a nicely worked goal finished off by Clark giving the visitors a meaningful control of the game.

From then on, it was all Newcastle. Full of confidence and drive, they went up and doubled their lead soon after and controlled every part of the game. The Toon army were ruthless in attack and capitalised on West Ham's shocking defending, and earned a vital three points.

Although they had to hold on to a one-goal lead late on, it was a fighting display typical of Newcastle on Saturday. Steve Bruce should be proud of his side's control of the game and fantastic fighting spirit, as the Magpies sealed a huge win on the road.

STAR MAN - Newcastle's all-round performance was excellent, and Jonjo Shelvey was at the heart of their battling display. The midfielder was instrumental in securing the three points and was great in creating chances throughout, setting up the Magpies' opener and getting their third with a sumptuous strike.

1 - Jonjo Shelvey has scored his first ever direct free-kick goal in the Premier League, with what was his 31st such attempt in the competition. Belter. #WHUNEW

Things you love to see 

Shelvey straight over to the away end to celebrate his goal! #NUFC ❤️ ​West Ham make the long trip up north next Saturday, as they face ​Burnley at Turf Moor. The Hammers are back in east London after the international break, as they host ​Tottenham on 23 November for what promises to be a tasty derby.

Newcastle return to Tyneside next, as they meet ​Bournemouth next Saturday. They then have two weeks before they make the trip down to the Midlands, meeting ​Aston Villa at Villa Park on 25 November.