Borussia Dortmund gave their manager, Lucian Favre, a perfect birthday present by securing a 3-0 win over Wolfsburg on Saturday.

Set up in a stubborn low block which included five defenders, Wolfsburg made it very hard for Dortmund to break them down in the opening stages. The Wolves hit back with a chance of their own seven minutes later, with ​Manchester City loanee Lukas Nmencha nearly marking his Bundesliga debut in style.

Injuries then forced Dortmund skipper Marco Reus and the assistant referee to withdraw just before the half hour mark and this lengthy delay largely took the sting out of the game for the remainder of the first half.

After a flat opening 45 minutes, BVB came out of the blocks quickly in the second half and got the reward for their early pressure when Thorgan Hazard smashed home his first goal for the club, after receiving intelligent pass from Achraf Hakimi in the 52nd minute. Dortmund got a deserved second goal six minutes later through Raphael Guerreiro and could have had a third soon after if it wasn't for a stunning Pervan double save - both chances were created by Hazard.

BVB put the gloss on a fine performance in the 88th minute with Mario Gotze converting a penalty to ensure the game finished 3-0.

Dortmund's front four had the tough challenge of breaking down the best defence in the Bundesliga this afternoon and it was one that they initially struggled with.

There was plenty of movement from the likes of Julian Brandt and Thorgan Hazard in the opening exchanges, but particularly

person: Dortmund are finished when Reus retires lmao, who could possibly take over his position?? 藍

me, a person with a functioning brain: pic.twitter.com/E3qsAB45xW

STAR MAN - ​Thorgan Hazard has not had the easiest of starts to his Dortmund career but he went a long time to silencing his critics with his fine performance this afternoon.

After struggling to make an impact on the game in the first half, Hazard was exceptional in the second period, scoring and assisting a goal as BVB romped to an important victory.

Dortmund needed a spark today to unlock the Wolfsburg defence and luckily it was provided by the Belgian who is finally beginning to step out of his brother, Eden's, shadow. 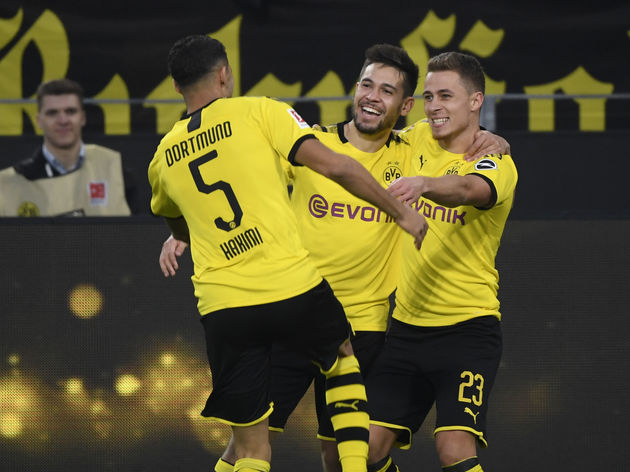 Next up for Dortmund is a vital Champions League tie against Inter. Lucien Favre's side will be looking for revenge after I