Roma came out on top in the Derby del Sole on Saturday afternoon, beating Napoli 2-1 in an impressive display at the Stadio Olimpico.

Nicolò Zaniolo opened the scoring for the hosts just before the 20-minute mark, rifling home a fierce effort from the edge of the box following a perfect Leonardo Spinazzola cut-back. Roma had the chance to double their lead when José Callejon was penalised for handball in the box five minutes later, but Aleksander Kolarov's spot-kick was expertly saved by Alex Meret. Arek Milik and Piotr Zielinski rattled the Roma woodwork in quick succession as Napoli began to dominate proceedings before the break. The visitors then gifted a second penalty to the home side, Mario Rui handling in the box from a Javier Pastore cross, and this time Jordan Veretout made no mistake, doubling Roma's advantage.

Milik pulled a goal back for Napoli with 20 minutes to play, tapping home from close range to breathe life back into the game for the away side. I Partenopei pushed Roma until the final minutes in search of an equaliser, and Mert Cetin was sent off in the final minute for a professional foul, but Fonseca's side held on to a valuable three points in Rome.

Following Federico Fazio's dismissal during Roma's previous match against Udinese - and given Fonseca's defensive injury crisis - the Portuguese boss had little option other than to hand a start to young Turkish centre-back Cetin. The 22-year-old had only made two substitute appearances for the Italian side before Saturday's fixture, but he's settled very quickly into life in Serie A.

It was a full debut to forget for the Turkish international however, who started the game well, but ultimately came close to costing his side a precious three points. Cetin looked comfortable until his error allowed Napoli back into the game, as he failed to cut out a dangerous cross by Hirving Lozano. The youngster was then shown a red card in the dying minutes, bringing down Fernando Llorente on the edge of the box when the Spaniard looked destined to test the keeper. Fortunately for Cetin, Milik's free-kick missed the target and Roma held on.

Much to ponder for Fonseca.

STAR MAN - This kid is so so special. Zaniolo was linked with a move away from the Stadio Olimpico all summer, but instead signed a new contract with the capital city club and has continued his meteoric rise to the top of European football. Zaniolo bagged his fourth goal in four games, receiving the ball of the edge of the box, shimmying to create the tiniest pocket of space and then slamming a fierce left-footed shot into the top corner. The Italy international also loves the ugly side to the game, and while he is able to create moments of absolute brilliance, the 20-year-old enjoys physical duels and possesses great strength in and out of possession.

​Napoli's aim at the start of this season was to challenge at the top-end of Serie A, and finally put a stop to Juventus' dominance of Italian football. Although Ancelotti strengthened his squad considerably over the summer, his players have not performed at the expected standard thus far. 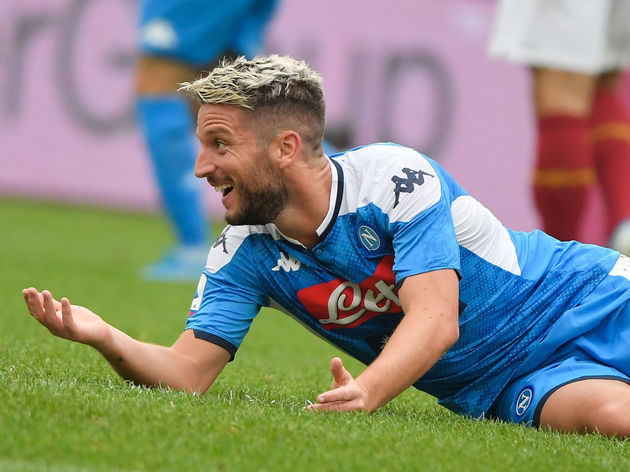 Defeat in Rome means that Napoli have slumped to four points behind Champions League hopefuls Roma in the race for the top four, and sit eight points behind leaders Juventus, with all title ambitions all-but-over.

STAR MAN - Napoli started the game slowly, but Zielinski was the man who dragged I Partenopei back into the game with a commanding midfield display. The Poland international drove Napoli forward, picking up the ball from deep and moving it vertically and effectively at great speed. The 25-year-old almost equalised in the first half with a powerful low-driven strike, but he was unfortunate to see his effort rebound off the post and away from danger. As Napoli grew into the game, Zielinski's influence forced Roma to dig deep, and the Polish star will feel hard-done by to finish on the losing side.

Roma follow up their impressive display against Napoli with a midweek trip to Germany where they face Borussia Monchengladbach in the Europa League, and then travel to Parma on Sunday evening.

Napoli will be desperate to improve after their disappointing showing in Rome, and Ancelotti's men host RB Salzburg on Tuesday evening before entertaining Genoa at the weekend.